Weingarten Realty Investors , a leading owner, manager and developer of shopping centres, announced today that it acquired the retail component of 2200 Westlake, located at 2200 Westlake Avenue in Seattle, Washington from Vulcan Real Estate. The average household income and population in the 3-mile trade area is $99,000 and 220,000, respectively. The property was purchased in a joint venture between Weingarten Realty and Bouwinvest in which WRI will hold a 65.7% interest. Weingarten’s investment is $43.5 million.

The property is located in the high-growth neighbourhood of South Lake Union. The area is home to Amazon and its existing 4 million square feet of office space and one block away from the multi-million square foot headquarters campus now under construction. Over 4,000 new residential units are reportedly planned or proposed in the South Lake Union area served by 2200 Westlake.

The purchase is part of an off-market transaction in which Vulcan purchased Weingarten’s Promenade 23, a high-profile property in the Central District of Seattle for $30.9 million. Vulcan has future plans to redevelop part of the existing centre as a mixed-use project that will include approximately 570 units of rental housing in two five to seven-story buildings as well as ground-floor retail.

‘We are extremely excited about the completion of this transaction with Vulcan. Our team, with market expertise, sourced and negotiated this complex transaction which creates unique opportunities for both companies. The acquisition of 2200 Westlake complements our existing Seattle portfolio and Vulcan’s purchase of Promenade 23 fits well into their expansion plans, so it is definitely a win-win for both companies,’ said Drew Alexander, President and Chief Executive Officer.

Weingarten Realty Investors is a shopping centre owner, manager and developer. At December 31, 2015, the Company owned or operated under long-term leases, either directly or through its interest in real estate joint ventures or partnerships, a total of 232 properties which are located in 18 states spanning the country from coast to coast. These properties represent approximately 45.6 million square feet of which our interests in these properties aggregated approximately 28.0 million square feet of leasable area. 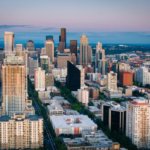