Watches to Make you as Nifty as the Grand Prix

Watches to Make you as Nifty as the Grand Prix

Christopher Ward mark the pioneering Grand Prix races of the early 20th century (the most exhilarating and courageous in the sport’s history) by expanding their Motorsport collection with 4 new COSC-certified chronometers designed to celebrate the winning drivers from the inaugural Grand Prix races in France (1906), Italy (1921), Belgium (1925) and Great Britain (1926).

The design of these proud additions to Christopher Ward’s Motorsport range places powerful emphasis on the drivers and their stories. A series of design details highlight the skill and achievements of these drivers and share the fascinating stories behind each race. In addition, the new models also carry a number of technical advances too.

For the first time in the C70 family, all the new models are COSC-certified chronometers and the back-plate of each watch has also been re-modelled to incorporate, beneath museum-grade sapphire crystal, a ceramic flag of the relevant host nation, alongside the race date. In addition, each watch case features a recessed plate on the side – a device that has proven hugely successful with the recent C70 D-Type 3527GT releases – displaying the names of the driver/s of each race alongside their winning times.

The designs express real dynamism, not only through their technical qualities – including COSC-certified accuracy – but also through the quality of the flag colours used on the front and back of each model. Best of all, they share the incredible stories of courage and skill behind four of the most influential and enduring Grand Prix performances ever seen.

The four models are offered on a premium quality Italian leather strap including Bader deployment or with a stainless steel bracelet option. Each of the four Grand prix models is available in a Limited Edition of only 500 pieces worldwide and this chronometer is certain to become a sought-after collector’s piece.

Prices start from £599 and stockist is: www.christopherward.co.uk 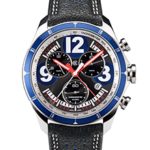