New figures from TheCityUK, the private-sector association and industry lobby group promoting the UK financial and professional services industry, reveal that the UK’s trade surplus in financial services is the biggest in the world, more than two and a half times bigger than the next largest surplus recorded by the US and three times higher than Luxembourg in third and Switzerland fourth.

The latest figures available show that the UK’s financial services trade surplus was US$71bn in 2013, up from US$68bn in 2012. According to TheCityUK, this demonstrates the huge competitive advantage the financial and related professional services industry brings to the UK, and the importance of the industry in attracting international business activity which creates jobs and generates economic growth.

“But we cannot afford to rest on our laurels, especially with other cities such as Singapore continuing to expand and grow. This is why London’s ability to innovate, reinvent itself and seize new opportunities is so important. We have seen this recently with the deals agreed with the Chinese, which will cement the UK’s position as the biggest renminbi centre outside Asia, and also with our status as the leading Western country for Islamic finance. The Financial Services Trade & Investment Board is another initiative vital to the UK’s status as a global financial centre.”

The new report from TheCityUK, The UK as an International Financial Centre, reveals that the number of financial centres seeking international business is growing, and Asian centres such as Singapore and Hong Kong are benefiting from shifting global trade patterns. However, in addition to these well-developed regional hubs, smaller centres such as Tokyo, Toronto, Moscow, Istanbul and Dubai are also developing alongside niche local centres such as Zurich, Sao Paulo, Johannesburg and Mumbai. Many of these centres are using London as a model and basing systems and processes on UK practices and principles. 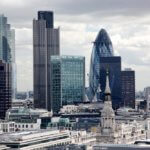