Ukraine Crisis “to Impact on Investors”

Latest developments in the Ukraine crisis are game-changers for investors, according to a leading global investment analyst.

The observations from Tom Elliott, International Investment Strategist at deVere Group, one of the world’s largest independent financial advisory organisations, come as European stock markets, including the FTSE which slid back from a seven-week high, tumbled as the tensions in Ukraine deepened on Friday.

“Six weeks ago, in market terms, the crisis looked like it might become little more than ‘a local issue’. But things have changed significantly in the last few days and they are continuing to evolve rapidly, and of course, this will impact investors,” said Elliott.

“It is becoming increasingly evident that the more success Putin has in ‘protecting’ ethnic Russians abroad, the greater the risk of trade sanctions by the west, and the weaker he will be at home. The Putin Paradox. Putin is gambling that the west remains divided and prefers to talk and trade rather than to act, an assumption that the US is actively challenging.

“Assuming direct evidence of Russian meddling in eastern Ukraine is found, reluctant Europeans – including the UK – will be shamefaced into tightening the existing sanctions on Russia. This, I believe, could trigger the end game for Putin.”

The Russian economy was already weakening before the Ukraine crisis unfolded, and it will be unable to withstand trade sanctions, said Elliott. “Russia is still, in essence, an exporter of commodities and arms, in return for which it buys western manufactured goods. “Putin’s popularity will almost certainly ebb with economic hardship. He will try to engineer a handover of power to someone in his ‘circle of trust’, but from all accounts that’s quite small,” he said.

As for the effect on already increasingly nervous investors, Elliott said that any sudden de-coupling of the Russian economy from the west—which is for the time being looking increasingly likely—will certainly hurt investors. “Retail investors have only a marginal direct exposure to Russia, while Ukraine is an even more exotic ‘frontier’ market that has attracted only professional investors,” he said.

“But the impact on the eurozone of trade sanctions could be severe in the near term, given that the region is only slowly emerging from its own economic crisis. Trade sanctions may involve limits on exports to Russia of European manufactured goods, and a cut-off of Russian gas imports, either self-imposed or because Moscow limits supply in retaliation.

“However, if sanctions are to remain in place over the long term, the West will inevitably and, I believe relatively quickly, readjust. For example the development of alternative sources of hydro-carbons such as fracking will be accelerated, and European consumer goods manufacturers will carry on as before but now re-priced to exclude growth prospects in Russia,” Elliott said. 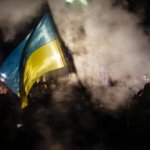