2020 has been a strange year for businesses and workplaces around the world. With the majority of us working from home for at least part of the year, workers have no doubt gained a new appreciation for a dedicated office space away from home – or, if nothing else, for the top-quality office chair as opposed to the spine-shattering kitchen chair of their makeshift home office.

Not only are we craving that distinct work-to-life separation in our lives once more, but many of us are missing our colleagues in a social way too. According to one survey, during COVID-19’s work-from-home requirement, Brits placed “work” as their second-most-missed thing – ahead of friends, shops, and even pubs. This isn’t a surprise, given Britain’s workers have previously admitted to deeming a good company culture to be their top work concern.

But, perhaps shockingly given the year we’ve had, UK workers are worryingly neglecting to mention a key concern within the workplace – the very concern that saw us all working from home – in hygiene and cleanliness. In the same analysis, concerns of “mess” were only voiced 20 times; noting a workplace as being “clean” or not featured just 22 times; and issues of “hygiene” were mentioned just once across the data.

Does this mean the UK’s workplaces are so clean and tidy that workers feel comfortable? Or are we turning a blind eye to a major workplace need?

A worrying lack of concern

If workers aren’t flagging concerns of cleanliness at work, is this a point in favour of the UK’s squeaky-clean workplaces? You would expect so, especially given the numerous requests for workplaces to up their cleaning requirements to help combat COVID-19.

But in truth, workplaces can be a breeding ground for bacteria. According to one report, the average office work desk contains far more dirt than the average toilet seat – 400 times more, in fact. Furthermore – and certainly one to consider in this COVID-19 era – touch-based transmission accounts for 80% of common infections. In a world of trendy open offices, this should certainly feature in workers’ minds when they look around their workspace.

Could it be that workers are simply taking cleanliness and hygiene at face value, even with a pandemic still at the forefront of our minds? It is easy to see why. For many people, so long as something looks clean, it is clean – which might be why an otherwise-clean looking keyboard can house around 7,500 bacteria and avoid being considered for a more than monthly clean by over half of workers.

This neglectful comfort is put into practice too, with 26% of workers eating lunch at their desks one to three times per week. 11% confessed to not cleaning their desks after, and 38% admitted to only binning wrappers and such after. Without attention to thorough cleaning habits, this behaviour could become costly for workplaces and workers alike. Just a quick wipe down with spray and blue roll would see employees’ desks kept in clean and hygienic condition after a working lunch!

The cost of careless cleaning

With so many people seemingly happy with a visually clean environment assuring them that surfaces are hygienic, why should workers rank hygiene with company culture and pay? Well, one report prior to the pandemic found that poor hygiene – and the resulting sickness it can spread through a workplace – costs UK businesses an eye-watering £1.56 billion every year.

Plus, it isn’t a case that UK workers aren’t aware of this potential pitfall. According to Elite Business Magazine, 46% of British workers suspected their unclean workplace had contributed to making them ill, and 68% placed a lack of hygiene in their workplace as a reason for their sickness. 48% suspected uncleaned desk phones as the germ-carriers of the office – rightly so, given that in another survey, only 28% of workers noted their desk telephones were cleaned at all.

Workers should be more concerned

Of course, it goes without saying that people ought to be more worried about cleanliness and hygiene during and after the pandemic. But why else should this feature much more highly on a worker’s list of company desires?

Fidelis Group points out several benefits to a clean and tidy workplace, including a great impression for clients, increased productivity, and safeguarding employee’s health. When “people” rank so highly in employees’ reviews of their workplaces, it seems logical that protecting the people around them should factor in too. Increased productivity leads to a better display of work, providing a stepping stone to a promotion – nailing the “pay” desire too.

It’s clear that cleanliness and hygiene in the workplace can often be overshadowed by ambition and company culture. But, for the benefit of those around us, our own health, and indeed our productivity levels on our quest up the corporate ladder, being more attuned to how clean our workspaces are is vital. 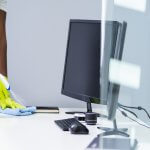