The warning was issued by BPEX, the trade body for pig production in the UK, which went on to say it will detrimentally effect many Western countries, as demand drops and supply is maintained.

“This will increase competition on global markets,

“It may have some knock-on effect on the EU market and, hence, the UK,”

The ban imposed by Vladimir Putin is in response to the sanctions which have been imposed on Russia over the continuing crisis in Ukraine.

Coming into effect from last Thursday, August 7, the ban has been introduced for at least a year. All members of the EU, Australia, Canada, Norway and the US are affected alongside the UK.

With all pork producers likely to undergo further due diligence processes to understand the full potential of the ban, the biggest hit country will be Canada. Russia presently imports about 90% of its pork products, with the North American country supplying 40% of that total.

The result could see prices in the UK drop significantly, with the boss of Midland Pig Producers, James Leavesley, telling the BBC:

“If Russia bans pork from other countries there is a danger it could be dumped into the UK market,”

With prices falling already and low margins as a result, Mr Leavesley fears for the future of the industry. His fears could be backed up by results overseas.

Chicago is seen as a benchmark for global pork pricing with ‘Lean Hog’ futures and options traded on the Chicago Mercantile Exchange (CME). After peaking in July the market has seen a fall of 18%.

At the time of writing, the market price was hovering at around 114¢. 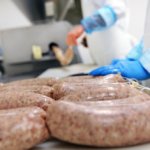