UK “Needs More Women in IT”

Increasing the number of women working in IT could generate an extra £2.6 billion a year for the UK economy, according to a new Centre for Economics and Business Research report commissioned by Nominet, the internet company best known for running the .uk internet infrastructure.

Women currently make up less than one fifth of the IT workforce. Based on current trends, the IT gender gap is set to widen slightly over the coming years. The report found that if the gender gap reduced and women filled the skills shortage in IT, the net benefit for the UK economy is estimated to be £2.6 billion each year.

The report found that 76% believe they lack suitably skilled staff in IT. Of these, 58% say this negatively affects productivity levels, estimating on average that productivity levels are 33% lower as a result. And 59% agree that their IT team would benefit from having a more gender-balanced workforce, while only 7% disagree. Improved communication skills (52%), improved staff morale (48%), and bringing new ideas to the organisation (46%) were the most frequently cited benefits.

The report found that low female participation in IT education is a key factor in the workforce gender gap. Only a third of ICT A-level students and less than a tenth of Computer Studies A-Level students are female. The imbalance remains at university, with girls accounting for only 19% of students taking computer science degrees. At present, only 9% of female students taking IT degrees go on to an IT career, compared with 26% of men.

The research also found that 53% agree that women find working in technology jobs less attractive than men do. Of these, 60% of believe that the IT profession is still perceived to be male-dominated, and 33% think IT is not promoted enough as a viable career option for girls in school or college.

Nominet’s Director of HR Gill Crowther said: “The digital economy is driving economic growth in the UK. Given the extent of the IT skills shortage, we can’t afford to only recruit from half the talent pool. It’s alarming to think that, if current trends continue, the IT gender gap will get bigger rather than smaller. We need to attract more women into the technology industry at every level and this starts with encouraging girls at school and university to study IT subjects. The new curriculum coming into force in September offers a fantastic opportunity for girls to become engaged with more technical subjects as the study of computing – and coding – becomes compulsory for all schoolchildren.” 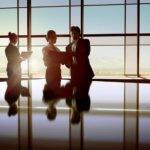