UK Growth ‘Steady as She Goes’ but Insecurity Trolls the Eurozone

Job creation continues apace and wage growth is finally picking up. Coupled with low inflation, this will give a boost to real household incomes, going some way to improving living standards. Lower energy prices are also feeding through to lower operating costs for companies, leaving more space for investment.

The brighter picture for growth this year of 2.7% (from 2.5% expected in November) also reflects the likelihood that the MPC won’t raise interest rates until early next year, helping to support growth of 2.6% in 2016.

But political volatility, both domestic and foreign, continues as the UK general election approaches, Greece’s fiscal position remains in the spotlight and instability continues in Ukraine. As a result, exporters are finding it harder to secure orders and net trade is unlikely to provide much of a boost to growth over the next two years.

“UK growth continues to outshine its counterparts in Europe and progress is ‘steady as she goes’.
“While lower oil prices are keeping costs down for businesses and consumers, the North Sea oil companies are suffering, harming jobs and investment in the industry.

“Now is not the time for complacency, but falling unemployment coupled with improving wage growth and rock bottom inflation should mean that people see more money in their pockets.

“But businesses are looking on anxiously as insecurity continues to troll the Eurozone and instability remains elsewhere.”

While the risk of deflation is growing, the CBI does not see a sustained period of widespread falling prices as likely, with the downward pressure from the oil price effect unwinding over time.

Alongside household spending, business investment is expected to continue providing sturdy support to GDP growth, rising by 5.8% this year and by 6.5% in 2016 as the UK’s expansion becomes further embedded.

In contrast, the UK’s export performance has remained disappointing. The CBI expects some improvement ahead, with growth increasing from 2.9% this year to 5.5% in 2016. But with import growth set to rise firmly due to strong domestic demand, the net trade contribution to GDP growth will be small at best.

A weak export backdrop is likely to weigh on the outlook for manufacturing output. While growth is expected to improve slowly, from 1.5% in Q1 2015 to 1.8% by the end of 2016, it will remain underwhelming.

More positively, the UK unemployment rate is expected to continue its downward trend in 2015 and into next year, levelling off at 5.2%, while wage growth is expected to reach 3.0% by Q4 2016.

“The UK is in good shape compared with other economies, with both investment and household spending underpinning economic growth. But there are still risks to exports from a shaky Eurozone.

“With finance ministers from across the bloc meeting today, it is vital that they reach a new deal on the bailout programme for Greece to give businesses the certainty they crave around prospects in the Eurozone. 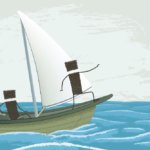