The UK economy looks set to expand by over 3% this year, according to the latest projections from economic forecasters the Centre for Economics and Business Research (Cebr).

Cebr’s latest forecasts show UK economic growth in 2014 and 2015 of 3.1% and 2.2% respectively, up from forecasts of 2.8% and 2.0% released at the start of the year. The upward revisions reflect a continued improvement in forward-looking indicators for the UK economy. In addition to record high business confidence, we have seen consumer confidence rising again in recent months after plateauing towards the end of 2013 (according to the YouGov/Cebr Consumer Confidence Index).

Households are likely to see their living standards improving, as earnings growth accelerates and headline inflation remains below 2% for the remainder of 2014. Declining unemployment is also likely to support household finances. Overall, Cebr expects real household disposable incomes to grow by 1.5% this year after declining by 0.6% in 2013.
Following concerns about the unbalanced nature of the economic recovery – consumer spending accounted for over 80% of the growth seen last year – growth should becoming more evenly spread as business investment grows strongly (by 10.1% in real terms this year) and the construction sector is supported by a robust pickup in housebuilding, especially in London. While household consumption accounted for 81% of the economic growth seen in 2013, this is expected to decline to 46% this year as the economic recovery becomes more balanced.

Beyond the short term, though, challenges remain. Economic growth is likely to peak this year and fall back in 2015 and 2016 as some of the factors driving economic expansion at present – such as reduced saving and a return to typical levels of consumer confidence – wear off. In addition, the UK still faces a huge challenge in improving its trade position. Cebr expects a record-high current account deficit of £79 billion this year, with the deficit remaining high throughout much of its forecast period. This deficit could lead to a depreciation of sterling going forward as markets becoming concerned about the persistence of this trade weakness.

Scott Corfe, Managing Economist at Cebr and main author of the report, said: “The UK’s economic position has improved significantly since the start of 2013 and we expect solid growth of over 3% this year. However, challenges remain and economic growth is likely to fall back after 2014. There will be difficult government spending cuts to be made in the next parliament and the parlous state of the UK’s trade position could become a significant economic issue going forward.” 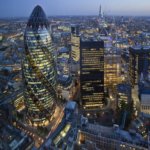