A U.S. Court of Appeal has ruled in favour of scores of Chrysler dealers who were terminated during Chrysler’s 2009 bankruptcy, holding that the U.S. government may have violated the 5th Amendment.

In June 2009, Chrysler terminated 789 dealers as part of its bankruptcy reorganization process. The dealers, many of whom had been with the manufacturer for generations, were given just 22 days to cease all business operations, leaving many of them with heavy financial obligations, such as mortgages or leases, that could not be met. The terminations were part of the 2008 Troubled Asset Relief Program (TARP), where the U.S. provided Chrysler with $12.5 billion in financial assistance. The dealers were paid nothing for the loss of their businesses.

In three companion lawsuits filed in Washington D.C., nearly 200 terminated dealers are claiming that the U.S. violated the Takings Clause of the 5th Amendment by conditioning the receipt of TARP funds on Chrysler terminating the dealers.

The theory was immediately challenged by the U.S., who claimed that it was Chrysler, not the U.S., that terminated the dealers; that the franchises were not “property” that could be taken; and that the U.S. is insulated from liability because the terminations were done by the bankruptcy court. The trial judge rejected these arguments, leading to an appeal before the U.S. Court of Appeal.

In a 29-page unanimous opinion, the Court of Appeal on April 7th agreed with the trial judge that these events could give rise to a violation of the 5th Amendment. The court indicated that the dealers may be making new law, stating that “the facts of this case are unique and raise issues that have not been decided before.” The court then remanded the case to the trial court to give the dealers an opportunity to plead and prove their allegations that the U.S. coerced Chrysler into terminating the dealers. The U.S. has 90 days from the date of the decision to petition the U.S. Supreme Court for review.

“This is a day that should be celebrated by the dealers, their families, and the population at large,” said Jonathan Michaels of Michaels Law Group, the attorney for the dealers. “There can be nothing more un-American than the government orchestrating the taking of your livelihood on 22 days’ notice, and then disavowing any responsibility for having done so,” said Michaels. “Now, those dealers – those families – have an opportunity to be heard. This is a win for every business owner in America.” 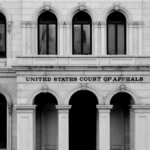