TOKYO,  Imperial Hotel Ltd have announced that the Japanese capital’s legendary Imperial Hotel is celebrating its 125th year of uninterrupted business this November 3 with an extensive renovation of all 361 rooms in its 31-story Imperial Tower as well as with a number of special events and activities underway now through March 31, 2016.

The Imperial Tower’s two top floors have been redecorated in rich, subdued hues of ivory and gray. Renamed the “Premium Tower Floors,” the accommodations on these exclusive floors are now available, offering numerous improved facilities and services, such as dedicated guest attendants who provide personalized transportation arrangements, room amenities, shopping, entertainment, city and travel information and restaurant reservations. Guests on these floors are also provided with complimentary coffee, tea or soft drinks upon arrival and complimentary beer and wine nightly from 5:00 p.m. to 7:00 p.m. Complimentary continental breakfasts are brought to guests on these floors by Room Service each morning of their stay. Soft drinks in the Guestroom Bar are also complimentary, as is usage of the Fitness Center, saunas and a pool. CATV news and sports from eight countries are available without charge, and bedside control panels are indicated in 10 languages. Cosmetics, soaps, irons, cellphone accessories, DVD players, bathrobes and bathing items are provided upon request at any time. Superior room single occupancy rates start at Japanese yen 50,000 per night while suites are from Japanese yen 130,000 per night; rates are exclusive of tax and service charges. Premium Tower Floor accommodations boast expansive views of Ginza, Tokyo Bay or the greenery of Hibiya Park and the Imperial Palace grounds.

On November 3, the day the hotel opened 125 years ago, The Imperial will host a rare live performance of classical Noh court music in the Main Lobby from 5:00 p.m. by two Living National Treasures, Japanese traditional drummer Shonosuke Okura and flutist Yukihiro Isso. Both Imperial Hotel residents and the public are invited to attend. The performance will be complimentary. In progress through March 31, 2016, an exhibition of the history of the landmark hotel has also been mounted in several public spaces inside the Main Building.

The number of foreign visitors to Japan is on the rise, boosted by the continuing weakening of the yen and the enhancement of incoming tourism, starting with the listing of Mt. Fuji as a World Heritage site, and, since July of 2013, the easing of visa requirements for visitors from ASEAN nations. As a result, more than 13 million foreigners visited Japan in 2014, a number that is expected to increase further this year. In advance of the 2020 Tokyo Olympics, the Japanese government hopes to see the number of foreign visitors increase to some 25 million, and to that end it is positioning Japan’s tourism industry as a major pillar of its industrial growth.

The Imperial Hotel is also enjoying substantial growth in the arrival of foreign guests. Although immediately after the Great East Japan Earthquake in 2011 the rate of foreign occupancy fell to under 30%, arrivals have since recovered and since 2014 have grown to over 40% of the total patronage. To promote expanded patronage from the Asian region, the Imperial Hotel also opened a new Singapore sales office on October 1 last year in response to a substantial rise in the number of guests from Southeast Asia, a region which is enjoying rapid economic growth, and in order to secure increased MICE-related business from that region. The Imperial prides itself on being one of Tokyo’s very few remaining Japanese-owned and operated full-facility luxury properties, offering rare opportunities for international guests to sample a variety of authentic Japanese hospitality not found with the manualized styles and services typical at foreign chain properties in Japan.

The Imperial Hotel opened its doors in the center of Tokyo in 1890 as Japan’s first fully Western-style luxury hotel in an elaborate, three-story, neo-Renaissance-style structure next door to the Rokumeikan, a social center designed to enhance interchange between international visitors and residents and the Japanese elite. It was replaced in 1923 by the now world-famous Frank Lloyd Wright Imperial, a richly detailed, bizarre, Mayan-influenced, art deco masterpiece that survived intact the Great Kanto Earthquake on the very day of its grand opening which razed vast sections of Tokyo and Yokohama. For decades, the Imperial Hotel received most of Japan’s visiting international dignitaries, royalty members and celebrities, and introduced to the Japanese public numerous Western-style innovations which in turn eventually became popular around the nation. 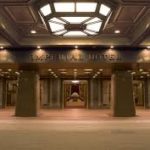