The Top 6 Cities in China to Retire In: Cost of Living and Other Factors

As one of the fastest-growing and evolving countries, China offers endless opportunities for soon-to-be retirees. The country’s bustling mega cities, breath-taking natural beauty, and age-old traditions make it a sought-after destination for anyone looking for an adventurous retirement.

At the same time, the country is renowned for its high quality of life, low cost of living, and world-class healthcare, making it an attractive destination for those looking for stability and safety. If you have already made China your preferred country to retire in, let’s pinpoint the best city to move to.

If you are planning your retirement finances and lifestyle, you might be looking for a Chinese city that combines a low cost of living with high standards of life and healthcare. The port city of Xiamen, located in the Fujian province in Southern China might tick all of your boxes.

Xiamen hosts one of the largest international harbours and was once dubbed the “Eastern Hawaii” by former US president Richard Nixon. The city encompasses two islands, is home to 4.3 million people, and it’s renowned nationally and internationally for entertainment, leisure, seafood, and mild climate.

Located on the south-eastern bank of the Pearl River Delta in the Guangdong province, Zhuhai is the perfect destination for those looking to enjoy a tranquil retirement. Historically one of the first Special Economic Zones established in the 1980s, Zhuhai remains one of the top tourist destinations in China and Asia.

Thanks to its mild climate, lush gardens, and tropical beaches, the city offers a great environment for retirement. What’s more, Zhuhai falls within 31% of cities with the lowest cost of living in the world.

Haiku is the largest city in the Hainan province, also known as China’s Florida due to the sandy beaches, warm climate, and plenty of entertainment. Haikou welcomes, every winter, over 4.5 million retirees from the other regions of China who are looking to escape the colder months in their hometowns.

In terms of quality of life and cost of living, Haiku offers some of the lowest property prices across China, boasts the highest air quality in the country, and provides retirees with a range of benefits, including discounted travel tickets and community activities.

Hong Kong is one of the most thriving places in China to retire, especially due to its high safety levels, world-famous tourist attractions, night markets, and food delicacies. In terms of healthcare, Hong Kong boasts one of the most advanced and affordable systems in the world.

What’s more, as an Introduction to Medical Health Insurance in Hong Kong, today’s policies cover up to 90% of healthcare costs for patients and are accessible even for those with a long-term condition, thus keeping out-of-pocket expenses to a minute and providing great overall coverage.

As the city remains one of the most expensive ones in China for expats, retirees require around $500,000 to maintain their lifestyle in Hong Kong after retirement – which is around half of what’s needed in the US!

Shanghai is the largest metropolitan area in China and one of the most sought-after destinations for seasoned professionals looking to continue working after retirement.

Shanghai isn’t just one of the leading financial centre’s of China, it is also one of the country’s safest cities and provides unparalleled living and healthcare standards. The city ranks among the most expensive ones in China, but retirees only need around $1000 to live comfortably in Shanghai.

Looking to enjoy a quainter, more laid-back lifestyle after retirement? Suzhou, in the Jiangsu province, is an enchanted city home to just over 10.7 million people. Suzhou, or the Venice of the East, is known for its pagodas, lush gardens, ornate viewing pavilions, and canals.

The cost of living here is relatively low, and the area falls within 39% of the least expensive cities in the world. Suzhou allows retirees to immerse themselves in the culture of China and enjoy a tight-community feel without having to compromise on healthcare quality and entertainment. 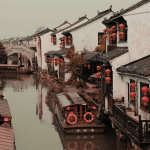