The Largest Luxury Hotel to be Built in Saudi Arabia

The Largest Luxury Hotel to be Built in Saudi Arabia

Coming in at a huge 10,000 rooms, the largest hotel in the world is set to make Saudi Arabia home.

The project is to be built within just two kilometers from the site of Mecca, which annually attracts two million Muslim pilgrims for the yearly Hajj. The Abraj Kudai is set to become the largest hotel in the world, when it opens in 2017 and will cost around $3.5 billion.

On completion the project will span 1.4 million square metres and feature a hotel that would be able to fit the population of a small town, shopping mall, convention centre, rooftop helipads, food court and bus station.

The building will be made up of twelve towers created with spaces geared to accommodate Hajj visitors. Artists renderings show a series of monolithic towers encircling a main domed tower, designed to echo a traditional desert fortress. According to Arabian Business, 10 towers will provide four-star accommodations, while two will be reserved for their most well-heeled clientele offering five-star amenities. 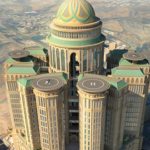