Greener initiatives are being utilised more and more across the globe, as Earth’s citizens try to safeguard the planet’s resources. We may have relied a lot on fossil fuels like gas and coal in the past, but due to these sources not being sustainable we’re now ambitious about developing practices which are more environmentally friendly.

The market for renewable energy now includes everything from wind turbines to wave power. Wind power is proving particularly popular, with the amount of energy generated across windfarms in just 2016 found to have exceeded the amount created via coal power plants in the UK for the first time ever. In fact, over 40 per cent of all the energy generated on Christmas Day 2016 was as a result of renewable sources and 75 per cent of that sum was from wind turbines.

As coal-fuelled electricity has dipped to its lowest output for 80 years, the future certainly looks bright for the renewables market and, in particular, the wind energy sector. Join joint integrity software experts HTL Group as they explore just how much potential this industry holds…

What we can expect in the near future

The wind energy sector had to reconsolidate record-breaking growth for the years between 2014 and 2016. In total, the global installed capacity at the end of 2016 was 486,790 MW — an impressive figure by anyone’s standards.

Growth is expected to pick-up once more in the years ahead though. In fact, there are predictions which expects the global installed capacity to rise to 546,100 MW. This year, this figure was anticipated to hit 607,000 MW before reaching 817,000 MW by 2021. Although the rate of growth is anticipated to slow, it’s clear that wind power will continue to occupy a large energy share on a global scale.

How is each area of the world performing? Asia, North America and Europe are expected to remain the dominant wind power markets. By 2021, it’s anticipated that Asia will create 357,100 GW of energy from wind turbines. Europe is expected to hit 234,800 GW, while North America is likely to generate 159,100 GW.

Investments to expect in the years ahead

Additional investments will obviously be required in order for the sector’s continued growth to be supported. In 2016, €43 billion was spent across Europe on constructing new wind farms, refinancing, fundraising and project acquisitions — an increase of €8 billion compared to 2015.

Offshore windfarms appear to be getting more attention than sites found onshore. Investments onshore dropped by 5%, while offshore reached a record-breaking €18.2 billion. Impressively, the UK is leading the way, raising €12.7 billion for new wind energy projects. This more than overshadows the country in second place, Germany, with €5.3 billion.

The total investment may be lower then. However, it’s clear that wind energy will remain vital to the global movement towards greener, more sustainable energy both now and in the future. 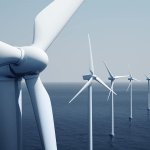