The Blueprint Of A Modern Leader

In a world full of individuals and a shared striving for equality, one role has pervaded throughout the course of human existence as crucial to the functioning of teams, organisations, and even entire countries. From Julius Caesar to Rishi Sunak, the importance of a leader – in some sense of the word – has been crucial for the growth of humanity.

That said, being a good leader requires more than just a self-proclaimed title. Good leadership is manifested over time and must be woven into the fabric of your every action. With rich documentation of some of the world’s best – and worst – leaders over time, there are plenty of lessons to be taken from individuals of the past, both real and fictional, into your business. This article will highlight some of the key aspects of leadership from the examples of some prominent figures in the industry.

Successful teams are built on trust and faith – in each other, but also in a vision or a goal. Martin Luther King – one of the most respected leaders in history – famously had a dream. His relentless pursuit of his dream despite the immeasurable obstacles in his way stands as an unrivalled source of inspiration for those looking to lead the way.

This drive must be balanced and grounded in reality, though, as MLK exemplified so influentially; we only have to consider Daenerys Targaryen from the acclaimed Game of Thrones series to see how it can go wrong, though. After her bloodline was shunted for the acts of her ancestors – explored further in HBOs House of the Dragon and summarised nicely in ExpressVPN’s coverage of the family lineage – her drive to restore her family name corrupted her virtue and turned her into an ultimate villain. One lesson we can learn from this: Don’t let your tunnel vision spoil your business.

Knowing The Difference Between A Boss And A Leader

While often used interchangeably, many would argue that a significant difference separates the two in society, as this Develop Good Habits informative piece does. While a boss might demand change, a leader drives change; while a boss may dictate, a leader inspires; while a boss may dominate, a true leader collaborates. Someone who is not controlled by the hierarchical power they are given and places themself amongst those they wish to lead will gain authentic respect as a leader. Successful corporate companies such as Zappos, who are utilising a holacratic business model, embody this mindset as an organisation

In an economy where profit is often an organisation’s main priority, a simple display of compassion can go a long way. By going out of your way to accommodate the emotional, physical, or mental needs of your team, you show that your interests extend beyond a depersonalised, professional aspect. Having a team who are comfortable in the knowledge that their authority figure truly cares for them as individuals will do wonders for your synergy, productivity, and overall satisfaction within a team.

Where better to look for a fictional, inspiring source of compassion than everyone’s favourite superhero, Superman? Committed to saving the lives of those not blessed with his gifts and refusing to take credit for his work, Clark Kent perfects compassion on a ‘super’ scale. Perhaps don’t try to fool your employers with a hidden identity wearing glasses, though – they might see through it in the real world.

No team member wants to work for a leader who doesn’t want to work for them; true leadership requires bi-directional care, effort, and compassion. 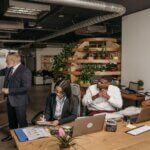