The acquisition will see Starbucks Japan purchase the remaining 60.5% majority stake presently held by its partner.

Starbucks Japan and Sazaby have been operating the joint venture since 1995.

With the country being home to some of the coffee giant’s most profitable outlets, Japan represents Starbucks’ second biggest market in volumes of sales across more than 1,000 cafes.

The chairman of the firm, Howard Schultz, released a statement saying:

“Japan is a market we know well and care deeply about, with more than 25,000 partners serving millions of customers every week at more than 1,000 stores.”

The move is widely expected to come ahead of an expansion in the region by Starbucks. It already has a presence in the market with its ready drinks products and canned coffee, with the acquisition likely to fuel further grocery store sales. 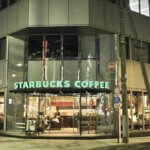