Sony announced it will launch its sleek 4K Ultra Short Throw projector across Europe by summer 2015.

The introduction of the 4K Ultra Short Throw projector (LSPX-W1S) is the embodiment of Sony’s Life Space UX ethos and the first step in realising this vision, which offers a new user experience that transforms living spaces into enriched experiential environments. Sony has a rich design heritage, merging state-of-the-art technology and craftsmanship to deliver visionary design for nearly seven decades.

With its 4K Ultra Short Throw projector, Sony blends high technological performance with sleek design in a format that is both simple to use and beautiful to experience. When placed at the foot of a wall, the projector can cast a 4K Ultra High-Definition resolution (four times the clarity of Full HD) 147” image, making movies and sports appear on a grand scale. The projector, which recently won the Red Dot Award(Product Design 2015, Best of the Best) and a 2015 iF design award, turns unused space into a wall-sized canvas and transforms living spaces into evolving environments.

The projector is easy to install and operate, and with its unique feature of projecting from the foot of a wall, it doesn’t require any installation construction, unlike previous conventional projectors. Viewers also don’t have to worry about interfering with the picture by casting shadows over the projected image.

“The 4K Ultra Short Throw projector provides a completely new and innovative entertainment experience that only Sony can deliver,” said Thomas Issa, Product Manager. “The idea is to remove conventional boundaries by merging your home design and technology into a beautiful and seamless experience. We’ve received unprecedented demand in Europe following the products release in the United States and Japan, and we are delighted to bring this breakthrough projector to customers looking for state-of-the-art design and product innovation”. 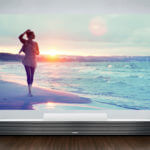