Somerleyton estate has been home to powerful figures going back almost 900 years.  From summer this year the bedroom refurbishment will be complete and Somerleyton Hall will be available for families or groups of friends to take exclusively for the first time.

Two floors have been completely refurbished complete with brand new bathrooms to make 12 bedrooms, all with stunning views of the surrounding parkland. The interior design is by Lara Crossley and Norfolk based Arie and Ingrams Design, who have preserved the tradition and luxury but added quirky themes and innovative design.

Guests at Somerleyton will have exclusive use of the main house including the historic library with its extensive collection of books and artefacts from past generations, and the multiple drawing rooms where afternoon tea or a glass of wine can be enjoyed in front of a roaring fire. To ensure variation, there are three dining rooms including the ballroom that can be used for banquet dinners, and your menu is decided beforehand with a personal chef who harvests the very best local ingredients.  In the summer months, the Orangery can also be transformed into a magical dining setting perfect to enjoy long summer evenings. And the fun doesn’t end there… the cupboard under the stairs has been transformed into a bar complete with a disco ball for those that want to continue into the early hours.

The gardens at Somerleyton are considered some of the finest in the country. Joseph Paxton, the architect of the Crystal Palace, designed the beautiful iron and glasshouses, and the pleasure gardens are full of rhododendrons, azaleas and rare trees. There is also a yew hedge maze for the adventurous providing many hours of entertainment for all ages. Amongst the many activities at Somerleyton are horse riding, water sports and fishing.

Across the massive Fritton Lake is the newly revamped Fritton Arms, a restaurant with nine very comfortable en-suite bedrooms. The look is shabby rugs, cosy chic grey walls, wooden beams, open fireplaces, mismatched chairs and squidgy sofas. The food is determinedly local thanks to head chef Stuart Pegg who wants to get as close to 100% estate-sourced as possible.  Pike is from Fritton Lake, venison is culled on the estate and game is shot during the season.  Prior to returning home to Suffolk, Stuart worked at The Dorchester and Gidleigh Park.  Dishes being created at the Fritton Arms include Swannington ham hock terrine with red onion marmalade, a burger made from the estate’s Welsh Black beef served with Norfolk Dapple cheese and triple cooked chips or a rhubarb creme brulee. Pegg is now working with the estates first female head gardener, Anna Outlaw, to grow produce in the hall’s spectacular walled gardens and Victorian glasshouses.

Hugh Crossley (Lord Somerleyton) is 43 and lives at Somerleyton Hall with his wife Lara 34 and their three children.  Prior to life in Suffolk, Hugh lived in London, where in 2000 he started up two Persian style bar/restaurants called Dish Dash. This largely paved the way for the development of the food scene in north Soho. He opened Hot Chip Shop in Norwich in June 2013 from which he has earned himself nicknames Lord of the Fries and His Lordchip. In 2014 Hot Chip was voted best chippy in Norfolk and best in East Anglia this year and is now crowd funding its way to expansion.  Before moving to Somerleyton Lara worked at Colefax and Fowler then Fine Art Commissions, which has left her perfectly equipped to refurbish all of the bedrooms and bathrooms at the hall and Fritton Arms.

Rooms at the Fritton Arms cost from £140 per room per night including breakfast. In the restaurant main courses start from £8.50.  To take Somerleyton exclusively for two nights it costs from £15,000 including dinners & breakfasts, lunch by separate arrangement. 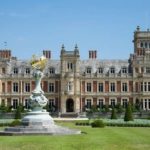