On 18 September people residing in Scotland, or those who are registered to vote in the country but are living overseas, go to the polls to decide whether to leave the Rest of the UK (RUK). With the latest opinion polls split on the outcome of the vote, businesses, leaders and newspapers are all starting to ramp up their campaigning.

Yesterday, the three leaders of the UK’s major parties and around 100 other Parliamentary staff descended on Scotland to make a passionate please for a ‘No’ vote. With the clear message that Scotland will be better if stays as part of the Union, Prime Minister David Cameron said that a ‘Yes’ vote would leave him:

The PM’s sentiments were echoed by Labour leader Ed Miliband who said that staying as part of the RUK was a case for the:

Meanwhile, Liberal Democrats leader Nick Clegg was on a visit to his party’s traditional Scottish heartland of Selkirk. Heckled at length by many in the crowd, with shouts of ‘You’re a liar”, Mr Clegg said:

“This is a momentous event which will affect everybody north and south of the border forever.”

All three leaders and other key figures in the ‘Better Together’ campaign also insisted that party politics was not the issue, urging voters not to throw away centuries of successful union.

However, the Scottish First Minister, Alex Salmond, urged Scottish voters not to be swayed, saying that the leaders could not be trusted. Also taking to the campaign in response to the Westminster descent on Scotland, Mr Salmond said that they were more worried about losing their jobs.

“Today what we have got is an example of Team Scotland against Team Westminster.”

The Referendum atmosphere has been further ramped up by the showings in the polls.

Over the last few months, most polls have been showing a relatively comfortable victory of the ‘No’ campaign. However, at the weekend, two significant polls showed the ‘Yes’ campaign moving ahead.

It is that key 10% of indecisive voters that the campaign will now be targeting, with less than seven dates before votes are cast.

Thursday also saw a number of newspapers in Britain pin their colours to the mast.

The influential newspaper The Scotsman came down on the side of the ‘No’ vote. Under its headline, ‘Scotland’s Decision’ the newspaper declared:

“With exactly a week to go before our historic referendum

The Scotsman gives its verdict on the choice before us: we are better together.”

It then laid out its reasons in a 2,000-word editorial article.

The FT meanwhile took much the same stance. With its editorial claiming:

“the case for union is overwhelming”

Meanwhile rumours are rife that News Corp’s executive chairman Rupert Murdoch is getting ready to declare his backing for a ‘Yes’ vote. Tweeting at the weekend, The Australian media magnate said that it would be a ‘black eye’ for British politics.

Long-time friends, it is not the first time Mr Murdoch has shown his support for Mr Salmond however. Back in 2012 he also took to Twitter to claim his opinion that Alex Salmond was the best politician in UK.

British businesses too are starting to get louder with their opinions.

Already there have been open letters from businesses and business groups coming down on either side of the argument. Today though, the battleground was further widened.

The Royal Bank of Scotland this morning confirmed that, in the event of a Scottish vote for independence, it would be necessary to re-domicile the firm to London. However, in a letter to employees, the bank insisted that this would not mean a closure of Scottish operations or job losses.

Conversely, the manager of Scotland’s largest fund said that independence would be a good venture for Scotland. Martin Gilbert, the boss of Aberdeen Asset Management said:

“I think an independent Scotland would be a big success,

but it is a secret ballot and I will abide by that.”

Meanwhile, major retail chain the John Lewis Partnership said that it may be forced to increase profits in its John Lewis department stores and its Waitrose grocery outlets.

The Institute for Fiscal Studies also issued a warning to voters, claiming that the NHS in Scotland would get less cash overall should it go independent.

With differing opinions across the board, a growing recognition of the debate across the world, the next week will be one of major upheaval for UK politics. 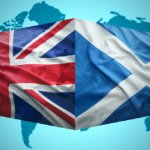