Rio Tinto chief executive Sam Walsh and Iron Ore chief executive Andrew Harding hosted the prime ministerial delegation, showcasing the operations and employees of the West Angelas mine in the Pilbara. Roy Tommy, a respected elder from the local indigenous Yinhawangka people and a Rio Tinto employee, led a Welcome to Country for the delegation.

The two prime ministers inspected Rio Tinto’s next-generation technology mining equipment, including an autonomous haul truck and drill which form part of the company’s Mine of the Future programme.

The Pilbara tour formed part of Abe’s four-day bilateral visit to Australia – the first by a Japanese Prime Minister since 2002 – and follows an invitation from Walsh to visit Rio Tinto’s iron ore operations after a discussion in Tokyo last year about the long-standing ties between Rio Tinto and Japan.

Walsh said: “It is a great honour to have Prime Minister Abe and Prime Minister Abbott visit our operations in the Pilbara and to see first-hand the very best mining technology and our talented people, who are the backbone of our iron ore operations.

“Our iron ore business was born on the back of Japanese investment and we will never, ever forget this support. Japan is now one of Rio Tinto’s most important trading partners and our enduring relationship for almost half a century symbolises the strengthening economic and trade ties between Australia and Japan.

“Under our Mine of the Future programme we operate the most sophisticated mining technology in the world, with state-of-the-art equipment from Japan at the core.”

Harding said “This visit builds on nearly 50 years of successful and long standing partnerships between Rio Tinto and our Japanese joint venture partners, suppliers, customers and friends. We are intent on continuing to build these relationships through our technology partnerships to deliver mutual benefits.

“We were pleased to show some of the equipment to Mr Abe and Mr Abbott and demonstrate why we are world leaders in mining technology and show how our highly skilled employees keep us at the forefront of production, technology and safety.” 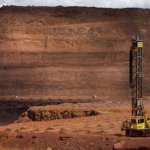