As with the menu at Rivea London, the new list draws a large part of its inspiration from the wines of Provence. A particular focus on rosé wine showcases both renowned producers from Côtes de Provence next to
some smaller offerings from lesser-known appellations such as Les-Baux-de-Provence.

Exclusive to Rivea London, the star of the show is one of the best rosé vineyards in Provence, “Chateau Barbeyrolles” owned by the charming Régine Sumeire. Ms Sumeire is recognised for growing fragrant rose bushes amongst the vines, with their celebrated rosé named Pétale de Rosé, due to its light pink colour.

Today part of the LVMH Group, Bulgari was founded in Rome in 1884 as a single jewellery shop and progressively imposed itself with its magnificent jewellery creations, emblems of the Italian excellence. The international success made the Company evolve into the current dimension of a global and diversified player in the luxury market, with a store network in the most exclusive shopping areas worldwide and a portfolio of product and services ranging from jewels and watches to accessories, perfumes and hotels.

Rivea London opened in May 2014, offering French and Italian cuisine inspired by the many years Alain Ducasse spent visiting the vibrant food markets in Italy and Provence. Protégé of Alain Ducasse and Executive Chef Alexandre Nicolas’ menu showcases the vivid flavours of the Rivera within the chic, convivial and relaxed setting of Rivea London.

Guests can enjoy sipping on a chilled glass of rosé while watching the world go by from Franco’s terrace. Franco’s rosé wine list features a diverse selection of rosé, from seven different countries and from more than twenty different grape varieties. Eight of the wines are exclusive to Franco’s and includes the world’s most expensive rosé, the Chateaux d’Esclans, Garrus, Domain Sacha Lichine 2008.

A passion for pasta, Franco’s pasta is freshly made in-house and favourites include Linguine with lobster, tomato, chilli & garlic and Pizzoccheri with cabbage, potato & bitto cheese with every menu item available as a low-gluten, spelt pasta alternative.

Why did Franco’s decide to focus on rose?
Historically Rosé wines have been considered to be a cheap wine that could not be taken seriously. Unfortunately this was not entirely unfounded as some earlier rosé wines were made by simply mixing a red with white wine, a practice that has thankfully stopped.

The rosé offering started with only 6 rosé wines. This initial selection proved so popular the next year we doubled it to 12 wines. In fact each year the number of rosé wines doubled so that today at the start of the ‘season’ Franco’s lists over 60 different rosé wines from around the world.

Rosé wine has not always had the popularity it does today. 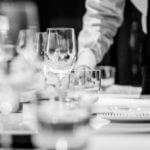