Qatar might not be the first emerging market that springs to an investor’s mind – or even the first in the Gulf region – but recent months have shown that its economy boasts a combination of significant advantages: a long-term investment plan and a level of resilience to external economic shocks and commodity price fluctuations.

Once known predominantly for being the wealthiest country in the world by per capita income, Qatar has found itself in the news recently with uncertainty surrounding its hosting of the football World Cup in 2022 and has faced the new normal of lower oil prices and emerging market volatility. However, look beyond the headlines and you will see a country where growth remains on-track and is increasingly opening up to international investors.

Undoubtedly Gulf markets have faltered in recent months as a result of the volatility in emerging markets. Investor concern about the slowing growth of the Chinese economy is contagious and sustained low oil prices are adding to fears that other emerging economies might follow. The MSCI Emerging Markets Index fell 6.0% between 14 August and 21 August 2015 and over the same period the Bloomberg GCC Index was down over 11%. However, whilst easy to group markets in the Gulf region together, it is important not to overlook the variance in how the economies are faring. For example, for the quarter to date the performance of the Qatari market has outperformed its GCC peers, with the Qatar index falling 11.9%, against a decline of 17.9% and 15.5% for Saudi Arabia and Dubai, respectively.

So what distinguishes Qatar from its neighbours?

Certainly, Qatar is a small country with very large natural resource reserves, mostly natural gas, and so solid GDP growth is to be expected. But the economy is seeing the benefits of the government’s long-term economic planning to diversify, with over 60% of its GDP now derived from non-hydrocarbon industries. In fact, these industries are growing faster than hydrocarbons – rising 11.5% last year. This is the reason that, despite the oil price plunge, Qatar’s growth remains stable at between 6% and 7%.The focus on infrastructure development is continuing – the sound logic being that if robust infrastructure is provided, economic development will follow.

Spending on infrastructure of $240 billion is expected ahead of the FIFA World Cup 2022 – $182 billion in the next 5 years alone. While the World Cup was a catalyst and is a deadline for some of these developments, the lion’s share of infrastructure spending is aimed at continuing long-term development which was planned or underway long before Qatar won the right to host the event.

This is encouraging not just for construction and related firms, but for financial services companies, as well as for the tourism, transport and leisure sectors.

Take the consumer and retail market in Qatar which is transforming, with over 1 million sq m of retail space set to open in the next two years. Consumer sentiment is the highest in the MENA region and as a result the retail sector is forecast to grow at an average 9.8% annually between 2013 and 2018, compared to 6-7% in the rest of the region. High-end hospitality is booming too, catering for a population forecast to rise by 7% by the end of 2015, as well as an increasing number of international visitors. 125 hotels are under construction and are expected to bring the number of hotel rooms in the country to 35,000, with 85% of hotels rated 4* or above.

This certainly creates a much more sophisticated investment prospect than any you could find in the emerging sub-Saharan African region, for example, where inefficiencies in governance and insufficient investment in infrastructure impose limits to the sustainability of growth.

What is more, the sophistication of Qatar’s stock market is developing rapidly and whilst European investors often hear of the Qatar Investment Authority – the country’s sovereign wealth fund – making high profile property investments overseas, the country is taking measures to encourage foreign investment domestically. Just last year index provider MSCI upgraded Qatar from frontier to emerging status, as liberalisation of the market in the country gathers pace. The Qatar Exchange (QE) has also relaxed companies’ foreign ownership limits, recently increasing the limit from 25% to 49%. Furthermore, investors from elsewhere in the Gulf have been re-designated as non-foreign, further encouraging liquidity in Qatari shares, to the benefit of international investors.

This all sounds like it is moving in the right direction, but how do returns and valuations compare?

Fortunately for UK investors, Qatar provides attractive dividends. The Qatar market yields 4.7% and is forecast to pay 5.2% for 2015. Compare that to the 2015 forecast yields of 3.54% for the UK FTSE All Share and 2.04% for the US S&P 500. Despite this, Qatari stocks are continuing to trade on attractive valuations, with a forward P/E ratio of only 10.6x – compared with 11.6x in Saudi Arabia.

With the economy increasingly diversifying, investment in Qatar is becoming an attractive option for those looking for exposure to a high-growth emerging market, which has proved itself more resistant to the market volatility felt by mainstream asset classes and less sophisticated emerging markets. It is comforting for investors in Qatari shares to know that even if the oil price bounces back, future returns are not reliant on the commodities cycle. 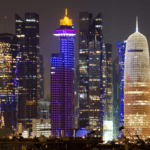