One in Five Brits Will “Work until They Drop”

One in five Brits admit they are planning to “work until they drop” in order to have a comfortable retirement, a new study by insurance company Aviva reveals.

Researchers found worries about being able to afford their “ideal retirement” means millions of over 40s are expecting to carry on working until they physically can’t continue.

Others are concerned about simply paying their day-to-day bills without the regular income from employment coming in. A further three in ten expect to continue working until at least a few years past the state retirement age.

Clive Bolton, managing director of retirement solutions at Aviva, said: ”For many, their retirement is a time they are looking forward to, whether it’s to get away from the pressures of work or simply having more time on their hands.

”But worryingly, it seems there are a large number of people who are so concerned about what their financial situation is going to be like, they are beginning to consider the possibility that they will always be working.

”I’m sure there are a small number of people who simply don’t want to give up work, but most would rather spend their retirement doing what they want to do, rather than continue to work.

”And while some will be working to ensure they have enough money to have the kind of retirement they are hoping for, it seems there are some who will still be getting up every day to go to work simply to pay the bills.

”Your state pension is unlikely to cover everything you want to do during your retirement and cover unexpected expenditure, so it’s important to have some kind of financial plan in place to provide additional funds to give you some breathing space.

”The change to pensions and annuities announced in this year’s budget now mean you can spend your pension pot how you want, but given we’re all living longer too, it’s still important to make sure you have enough put by to cover your annual costs for the long term.”

The study of 2,000 over 40s found that while the average adult would like to retire around the age of 60, one in five believe they will be working right until the bitter end.

More than three quarters said they are worried about being able to afford all they have planned during their retirement. Another 64% are concerned about simply paying for day-to-day living costs.

But despite these fears, around three in ten over 40s have no plans in place to fund their retirement. Even of those that have a financial plan, 64% admit it’s probably not going to be enough to do everything they want to do. And almost two thirds of those surveyed wish they had started to plan for their retirement much earlier. 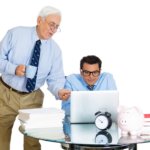