News Corp has announced that it has successfully completed its acquisition of Move, Inc. Move is a leading provider of online real estate services and operates a network of sites, including realtor.com®, the official website for the National Association of Realtors®.

Through realtor.com® and its mobile applications, Move displays more than 98% of all for-sale properties listed in the US. The Move network of websites reaches more than 30 million people per month, who spend an average of 22 minutes each on its sites.

“In partnership with the National Association of Realtors® and its one million members, we look forward to turbo-charging realtor.com® and making it the most popular and profitable property site in America,” said Robert Thomson, Chief Executive of News Corp. Mr. Thomson said that the acquisition of Move extends News Corp’s operations globally and digitally, and substantially bolsters the real estate pillar of its business.

The previously announced tender offer by a subsidiary of News Corp for all of the outstanding shares of Move common stock at a price of $21.00 per share expired as scheduled at the end of the day, 12:00 midnight, New York City time, on November 13, 2014. Excluding shares tendered by notice of guaranteed delivery, a total of approximately 34,299,586 shares were validly tendered into and not withdrawn from the tender offer, representing, together with the shares owned by News Corp and its subsidiaries, approximately 83.1% of Move’s outstanding shares. As a result, News Corp, through its subsidiary, has accepted for payment and will promptly pay for all such validly tendered shares pursuant to the terms of the tender offer.

Following its acceptance of the tendered shares, News Corp completed the acquisition by causing the merger of its subsidiary with and into Move without a vote of Move’s stockholders, pursuant to Section 251(h) of the Delaware General Corporation Law. Upon completion of the merger, Move became an indirect, wholly-owned subsidiary of News Corp. As a result of the merger and in accordance with the terms of the merger agreement, all eligible Move shares not tendered into the tender offer were cancelled and converted into the right to receive $21.00 per share in cash, without interest and less any applicable withholding taxes, the same price per share offered in the tender offer. As a result of the acquisition, Move shares ceased to be traded on the NASDAQ Stock Market.

REA Group Limited, in which News Corp owns a 61.6% interest, has entered into a definitive agreement with News Corp to acquire a 20% stake in Move. The transaction is expected to be completed on November 17, 2014. 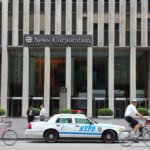