Cemex has opened a new wharf at Dagenham to provide what it says is the closest aggregate production north of the river to central London.

The processing plant can produce 500,000 tonnes a year with capacity for more, most of which will go into concrete for construction in the capital city.

Six months has been spent converting the site, which was previously an asphalt plant, that was decommissioned in 2009. The site was then used as a depot for limestone brought from quarries in north Wales for the London market.

“Following the slow-down in construction, the recovery has resulted in severe materials shortages particularly around the London area,’ said Cemex aggregates operations director Rob Doody. ‘We have similar operations at Northfleet and Angerstein, close to Dartford but they are both south of the river. It made strategic sense to revitalise the site at Dagenham to service the growing markets in central and north London.” 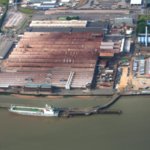