More Than Half Over-55s Want To Work

More than half of over-55s currently in the workforce are happy to work past the default retirement age of 65, according to new research from MetLife.

Its nationwide study found 54% of those aged 55+ who are currently in jobs want to keep working when they get to 65. However one in four want to reduce their hours and work part-time either in their current job or with a new employer.

MetLife believes the demand for part-time work highlights the need for changes in retirement income solutions to enable people to adapt to new working patterns and reductions in income. Solutions could include the use of deferred income guarantees enabling savers to plan ahead for retirement guaranteeing a level of income.

The research, which was commissioned as part of Dr Ros Altmann’s report ‘Pensions – Time for change’ sponsored by MetLife, underlines the need for new thinking on pensions. Dr Altmann’s report highlighted how retirement and pensions have not kept up with improvements in life expectancy and national health.

Dominic Grinstead, Managing Director, UK, MetLife said: “As life expectancy is rising and working lives are getting longer, the demands on retirement income have evolved and the demand for part-time working reflects that. New living patterns require retirement income solutions that offer flexibility to ensure sufficient income will be provided in later life.

“However the research also shows that people are not taking – or getting the advice they need to adapt. Sound independent financial advice is central to people’s ability to make the right retirement income choice. The Government is doing its best to promote long-term savings and the industry should encourage people to look beyond traditional solutions such as annuities when appropriate.

The MetLife research shows those aged 55+ who want to carry on working full-time overwhelmingly want to stay with their existing employer – more than 90% say they want to continue in their current job. However those who want to work part-time are more likely to switch to a new employer – nearly 60% would move to a new part-time role.

MetLife passed the £4 billion assets under management milestone a year after hitting the £3 billion mark underlining the continued strong growth in the unit-linked guarantees market.

Continuing expansion is being driven by the success of its new generation of guaranteed products offering market-leading deferred income rates of 4.25% and shorter capital guarantee terms.

MetLife has seen rapid growth underpinned by its Managed Wealth Portfolios which have grown to more than £1.3 billion under management in just 12 months after launching the new funds in partnership with world-leading asset manager BlackRock. 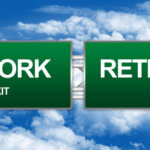