52% of respondents say workplaces are yet to offer EV charging according to a recent survey of EV drivers, despite huge appetite from employees.

More than 52% of surveyed EV drivers, or those considering buying an EV, do not have access to a charge point at their place of work, a YouGov survey commissioned by Monta has revealed today.

When questioned further, 82% of these drivers expressed a desire to charge their EV at their place of work if it was available.

Just 25% of respondents’ workplaces have an EV charge point installed, according to the survey. Only 10% of surveyed EV drivers reported charging their EV at their place of work.

Despite there being 530,000 battery electric vehicles in the UK, the continued disconnect between accessibility and availability of EV charge points is still putting off a large number of would-be owners.

“There’s a huge gap between what EV drivers want and what is currently available in the UK. While workplaces are still being slow to install charge points, their employees are charging at expensive public chargers or waiting until they get home and plugging in at peak times. Both of which will become more untenable as energy prices and the demand on the grid increases.” said Alok Dubey, UK Country Manager at Monta.

“Workplaces are a crucial charging solution to help build a stable and accessible charging infrastructure in the UK, and there are huge benefits for employers who install a charge point,” Dubey said.

“There are several ways to raise revenue from a charge point in a work environment. For example, business owners can share their charge points with the public during weekends or outside work hours, earning a small profit on per charge while contributing to the continued electrification of the UK’s infrastructure.”

“Staff and the general public alike are showing a huge appetite for workplace chargers due to the lack of viable options elsewhere – especially those in inner cities, without access to private driveways or nearby public chargers. One-in-five EV drivers primarily work from home, but how many would prefer to work in the office are put off by the lack of charging at work? If employers are serious about wanting staff to return, then the place of work needs to be seen as an extension of the home office where amenities are provided to make commutes more attractive,” Dubey concluded. 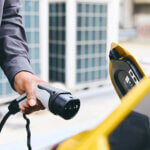