Have your Christmas cake and drink it too with Beinn Dubh ruby black whisky.

Beinn Dubh single malt whisky, is the perfect gift this Christmas: with hints of rich, decadent chocolate – as well as fruit and currants – it’s just like Christmas cake in a glass. For those who love rich traditional fruit cake, Beinn Dubh captures the taste perfectly – without the months of preparation that goes into making one.

The whisky is inspired by Ben Macdui – the highest peak in the Cairngorm mountain range – which translates from Gaelic as the black mountain. Its name is also the inspiration for the enchanting ruby-black colour of the whisky, which conjures up feelings of warmth on a cold winter day.

Beinn Dubh is produced by Speyside Distillery, which lies in the very heart of the Cairngorms National Park – a stunning part of Scotland. The distillery wanted to create a whisky that celebrated the local area and captured the magic of the mountain: water from Ben Macdui is even used in the distillation process.

Speyside Distillery CEO John Harvey McDonough says, “We are very proud to be based in such a spectacular area of the world and wanted to celebrate the natural beauty that surrounds the distillery. Each part of Beinn Dubh is inspired from the black mountain – it is a captivating whisky due to its taste, the unusual ruby black colour and the story of its creation.”

The taste of the whisky is deep and dark, just like the mountain – fruits, currants and chocolate dominate at first, but these gradually give way to both bitterness and sweetness. 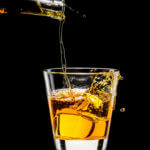