Last June, the U.K. government’s Central Digital and Data Office released a roadmap to end its reliance on legacy systems in three years. It realised that hanging onto its outdated hardware and software was hampering efforts to deliver services to the public.

The modernisation of hardware and software delivers a slew of benefits, from saving costs to making an institution more resilient against cyber attacks. But not everyone has the capital or time to spare to perform the upgrade. Instead, they often settle for the next best thing: upgrading their legacy systems to the fullest extent possible.

Legacy systems modernisation is more than simply updating software to the latest version. The options explained here involve rewriting the software’s code to stay up to spec. To understand more about legacy systems, it’ll help to find the best IT consultants in Salt Lake City, such as Executech. They can provide further information and technical assistance.

Below are some options to consider when modernising legacy systems:

Encapsulation is the least coding-intensive of the options but also carries the least risk. In most cases, the code undergoes minimal changes, mainly the interface, and is integrated into modern presentation and data access layers.

However, the minimal changes in the code are its major drawback. Encapsulation hardly changes a legacy system’s internal workings, so the issues of high upkeep and outdated functions remain. Still, it’s ideal for legacy systems that are too valuable to replace, at least for the meantime.

Another option that’s less intensive on coding is data migration. As the term suggests, it involves moving legacy systems to modern infrastructure. A good example is moving systems and all their data from an on-premises server to a cloud-based one.

Data migration works if a business needs its legacy systems to buy time for more modern solutions to come online. In the example above, this approach delivers the benefits of cloud computing, such as remote accessibility, flexibility, and scalability.

One problem with data migration is that the legacy system is brought to the modern infrastructure as is. Compatibility issues might arise, preventing it from working as intended.

In switching platforms, the system has parts of its code rewritten to work with modern infrastructure while keeping its original functions. It also usually involves moving the system to a colocation facility or Infrastructure-as-a-Service (IaaS) centre.

The intention of system integration is similar to switching platforms, which is to change the code without changing its original functionality. However, this step integrates new technologies into the code. As such, the changes are more significant.

Organisations that maintain legacy systems on-site and in cloud storage can find system integration an ideal solution. Not all apps and programs need to benefit entirely from the cloud, helping reduce cloud migration costs and the likelihood of mistakes that drive them higher.

Most legacy systems operate on a monolithic architecture, a model that unifies several functions into a self-contained unit. While easy to implement and debug, a single error in the architecture can render the entire system inoperable. Its successor—microservices—resolves this problem.

Altering the system’s architecture warrants a near-complete overhaul of the legacy system. Changing it to the microservices model enables the system to keep working even if a single function encounters an error. That said, changing architecture is costly and time-consuming.

If the legacy system starts affecting an organisation’s return on investment, it may be wise to rebuild it from scratch. Essentially, it results in a modernised version of the old apps and programs, with their scope and specs the only things carried over.

In rebuilding a legacy system, it’s crucial to go low and slow, especially if it’s in active use. A rushed project won’t benefit anyone, including customers using the app or service. It’s advisable to publish a roadmap for customers and staff to stay updated.

The last approach asks an organisation if modernising its legacy systems is the ideal solution. Believe it or not, in many situations, the problem may lie more in an outdated workflow than in obsolete software.

Retiring is the only option that may not warrant legacy systems modernisation, depending on the assessment. An up-to-date workflow can spare companies the trouble of temporary downtime and its costs. Of course, such a workflow can only take them so far.

Legacy systems modernisation can be a cost-effective measure to help organisations keep pace in a rapidly-evolving technological environment. It’s essential to choose from these seven options based on requirements. If none is feasible, the only recourse is to replace legacy systems entirely. 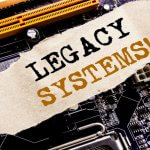