Kids and Social Media: A Guide for Parents

If you search for someone’s name online, including your own or your child’s, some of the primary things that are likely to come up relate to social media. This might include social media profiles, photos, comments, and more.

Social media is a pervasive part of many of our lives on a daily basis. It does come with benefits. There’s a sense of social connection, which was especially relevant during the pandemic when people were often physically isolated.

Using social media can help you stay in touch with family who might live far away, it can be a source of news and information, and it can also be fun for people to use these platforms.

At the same time, social media has very real risks ranging from the potential for identity theft to occur because of the information shared on these sites to the psychological damage that teens often suffer when they’re interacting on social sites and apps.

You want your children to learn how to make the right decisions in an independent way, including in how they interact with social media. You also want to protect your kids from the risks that being on sites like TikTok, Instagram, and others can bring.

How do you strike that right balance, and what should you know as a parent?

Most Popular Sites Among Young People

There was a time when Facebook reigned supreme in terms of social media platform popularity, but now others have edged it out of the way.

According to a Pew Research Center survey of American teens between the ages of 13 and 17, TikTok is one of the platforms that’s grown most in popularity since it debuted in North America a few years ago. Around 67% of teens in this survey say they use TikTok, and 16% said they use it nearly constantly. On the other hand, the share of teens reporting the use of Facebook has gone from 71% in a 2014-15 survey to 325 currently.

Thirty-five percent of teens say they’re using at least one social platform almost constantly. TikTok and Snapchat users are especially engaged, with YouTube coming in close behind these two.

Fifty-four percent of teens said it would be hard to give up social media, and around one-third of surveyed teens said they feel they spend too much time on social media.

Most teens have access to digital services as well. Ninety-five percent say they have access to a smartphone, 90% to a desktop or laptop computer, and 80% to gaming consoles. The share of teens who say they’re online almost all the time has almost doubled since 2014-15.

What Are the Risks of Social Media?

Despite the fact that teens so often use social media, it does carry major risks that they and their parents have to be aware of. Some of the risks of social media that are especially relevant to teen users include:

Oversharing: We’re all sometimes potentially guilty of oversharing online and on social media. Teens may be more likely to overshare than adults, however. Teens might post a lot more details about where they go to school or what their daily schedule is like. Bad actors or dangerous people can use this information to have access to teens. Identity thieves also thrive on having so much information readily available to them about people’s lives. When someone’s sharing things like their pet’s names or their favourite sports teams, they might not think that identity thieves can use this to guess passwords and steal people’s identities.

Assuming private is safe: While setting privacy settings on social media is important, that doesn’t mean this is the only thing teens should do to avoid risk. Kids tend to think if they’re setting their profiles to private, they’re inherently safe. Privacy does give some level of control, but it doesn’t mean that information can’t be shared by their friends or followers, for example.

Predators: Online predators often use social media to groom their victims. They don’t immediately see a photo of a young person and go kidnap them in the majority of cases. Online predators cultivate long-term relationships with them, and then they can end up having the young person come to them as a result.

Marketing: There are ads and different marketing approaches that are common on social media and may be hard for teens and young people to understand they aren’t legitimate. Deceptive marketing on social media can cause teens to believe in realities that are anything but real.

Bullying: There was a time when if a child or teen was being bullied, at least they had a reprieve at home when they weren’t at school. Now, with social media, cyberbullying can put them at risk of this and leave them with no safe space or way to escape.

Exposure to inappropriate content: There is always the risk on social media that your child could be exposed to things that perhaps are inappropriate, at least for their age. This could include sexual content, violence, or things that are disturbing.

Mental health: Social media can have damaging effects not only on teen mental health but on the mental health of people of any age. Social media can be addictive. There’s a release of dopamine when you use social media or get a like or some other form of recognition that’s similar to what happens when people use drugs. There’s also FOMO, or the fear of missing out on social media. Your teen may see other people doing things and feel like they aren’t part of it. That can lead to feelings of exclusion and isolation. There’s a false sense of perfection that’s often conveyed on social media because of the use of filters and photo-editing.

How To Protect Your Child on Social Media

There are things you can do to protect your teen if they are using social media, rather than simply telling them not to use it at all.

First, you should have clear guidelines for use. You want to cover the basics like when you’re okay with your child using social media, how long they can be on it, and where they can use it. For example, maybe your teen is only allowed to access social media when they’re in common areas of your house, like the living room or kitchen, but not when they’re in their bedroom.

Your child should agree not to post anything inappropriate, and they should know how to be respectful to others when they share content. As an example, your child should learn if there’s something they wouldn’t feel comfortable saying to a person’s face, they also shouldn’t say it online. Kids should get consent before they share any images of other people.

Go through privacy settings with your teen. Walk through each platform they use and make sure they have privacy settings on. You can help your child protect their privacy online by avoiding the addition of personal details like their birthday on their profiles. They shouldn’t share any personal information online with people they don’t know, and they should log out after using a public computer. You should encourage your teen to regularly check their location and privacy settings.

When your child is dealing with someone they don’t know or who’s posting content that might upset them, they should block and report that person. Teach your child or teen only to accept friend requests when they know the person and to take screenshots of things they find disturbing.

A lot of platforms will make social media profiles public by default, so you need to ensure you’re customizing all the settings. You should disable any features that share the geographic location of your child or teen, and you should use content filters if possible. You can set profiles to block at least some of the things on social media that might be age-inappropriate. You can also add parental blocks on your child’s device or your home internet network.

There are tools that let you monitor your child’s online activity, and these will often alert you if anything seems off.

Finally, if your teen is active on social media, encourage them to have a healthy sense of balance in their life. This means logging off at night and perhaps putting their device in another room. There need to be boundaries on how much time is being spent on social media, and you need to encourage your teen to step away and do things without their devices on a regular basis. Maybe that means they exercise, meet with friends in person, or find somewhere to volunteer. You don’t want your teen’s entire world to be online or on social media. 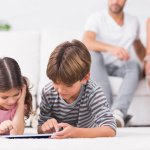