The meeting will be hosted in Japan on 19-22 October 2016. It will bring together 2,000 leaders and future leaders from the arts, culture, business, government, academia and civil society as well as representatives of the Forum’s Global Shapers and Young Global Leaders communities. The aim is to explore visions of these next-generation leaders for a more united, inclusive and equitable world. They will develop action plans that will achieve these goals in their lifetimes. Hosted by the Japanese government in October 2016, the event will kick-off the preparations for the Tokyo 2020 Cultural Olympiad.

“We would like to establish an effective organization of the Special Meeting in Japan and will be working with the World Economic Forum towards that goal” Shimomura said.

“Just as the Olympic spirit unites people across nations, we’re hoping that this event can help leaders come together to build a more peaceful society based on shared values,” said David Aikman, Managing Director and Head of the New Champion Communities of the World Economic Forum.

To watch the announcement with Minister Shimomura you can go here. 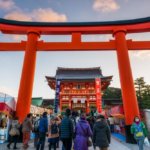