This year, Italy celebrates the 500th anniversary of the birth of Catherine & Cosimo I de’ Medici of the famous Medici dynasty. A programme of special anniversary events will take place in Italy across the summer, including new exhibitions, guided tours and theatrical performances. To mark this occasion, Sardatur Holidays – the UK’s leading Italian holiday specialist – has created an exclusive five-night Medici-themed holiday package, In the Footsteps of the Medici.

The Medici touch can be felt all over Italy from UNESCO Heritage-listed palaces, villas and gardens to celebrated works of art and architecture that are a result of their patronage. The five-night trip combines the most famous Medici sites in Tuscany and Rome, stays at two of Italy’s finest luxury hotels built by the family, and also visits a selection of the Medici Netflix series filming locations.

Next stop is Florence, widely considered to be the “Heart of the Medici”, where The family ruled the city throughout the Renaissance. A private tour of the city to discover the Medici legacy includes the Medici chapels within the  Basilica of San Lorenzo, which are the eternal resting place of the Medicis; Palazzo Medici, the residence of Cosimo the Elder; and Santa Maria del Fiore, the religious centre of the city topped with the gold Medici ball commissioned by Lorenzo.  Some of the greatest Medici works of art can be found in Florence’s celebrated museums, including the Uffizi, the Palatine Gallery, the Treasury of the Grand Dukes and the Galleria dell’ Accademia.

The Tuscan tour also includes lunch and wine-tasting in Montepulciano, a Medieval hilltop town in Siena and filming location for Medici The Magnificent. And a visit to Pienza which was used as the set location for Cosimo de’ Medici’s wedding in the Netflix series.

The trip concludes in the great capital of Rome, where guests will visit The Villa Medici at the bottom of the famous Spanish steps, which was built by Ferdinando I de’ Medici.

Across the five-night trip, guests will stay at two of Tuscany’s finest hotels, both built by the Medici family:

Sardatur Holidays ‘In the Footsteps of the Medici’ five-night package starts from £2,710 per person, including British Airways flights from London to Pisa and Rome to London.  Accommodation comprises three nights at Artimino and two nights at Fonteverde Spa Resort, on a bed and breakfast basis.  Private airport transfers.  The package includes 1 wine tasting and lunch at Artimino, 1 wine tasting and lunch at Pienze and private guided tours of cities and attractions as per the itinerary. 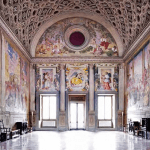