The increase in UK car production is driving substantial growth in automotive supply chain mergers and acquisitions, according to a leading industry expert.

KPMG’s UK Head of Automotive, John Leech, said KPMG has acted as corporate finance advisor to vendors of automotive suppliers on five separate successful deals in the last seven months and he expects activity to increase.
“The reason for this is fast-growing UK car production, notably by Jaguar Land Rover which is requiring suppliers to attract investment to expand capacity and set up overseas facilities,” he said.

KPMG’s automotive M&A specialist, Simon Heath, said “Buyers include automotive suppliers from US, China and Europe but also private equity excited by forecast growth in UK car production to two million vehicles in 2017 which might see the UK beat its all-time production record.

“And it’s not just the pure growth in production that is attracting these buyers; there is an on-shoring trend gathering momentum as UK car manufacturers highlighted a desire to onshore over £3 billion of parts currently supplied from overseas in 2012. Our own analysis shows this on-shoring figure has grown substantially since then.”

Overseas trade buyers are frequently under pressure to follow and co-locate with their manufacturers, and so many pure Asian or North American suppliers are considering European acquisitions to grow their global footprint, said Heath. At the turn of the year, Ford announced plans to cut its number of suppliers by 40%, and so the pressure to internationalise is intense, he added.

“The UK has risen up the list of favourable locations within Europe to invest in. We have a clear growth story, premium carmakers enjoying attractive margins and the most joined-up industry and government in Europe with a focus on supporting innovation such as low-carbon vehicles,” he said.

Latest figures from the Society of Motor Manufacturers and Traders (SMMT) revealed that car production had grown by 12% in March, driven by demand from the EU. 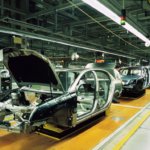