How Pharmacies Have been Affected by Brexit

Britain’s decision to break away from the EU has had an effect across many industries including science, technology, automotive and the pharmaceutical industry. The move has made the business model of running a pharmacy more of a challenge, both for existing companies and those seeking to enter the market.

In this article we’ll explore some of the challenges facing pharmacy businesses and take a look at what the future might hold for the healthcare industry.

The cost of operating a business

In the current economic climate, with increasing interest rates, high energy bills and inflation, operating any sort of business is likely to be a costly challenge. Although levels of demand in the pharmaceutical industry might not be greatly affected, profit margins and the ability to make enough to stay afloat are.

Costs to take into consideration as a pharmacy business owner include salaries, bills, maintenance, rent or mortgage and training. It’s certainly wise for any pharmacy proprietor to consider pharmacy insurance, which might offer cover should anything happen.

Although the dispensation of prescription medicines are the main area of service for a pharmacy, many businesses also offer a range of additional goods such as toiletries, supplements and other essentials. However, as customers are increasingly likely to want to shop around to get the best prices, pharmacies could find themselves suffering an even bigger loss.

Effects of Brexit on supply chains

Supply issues since Brexit have meant that many pharmacy businesses have struggled with a shortage of certain medicines. This has resulted in delayed prescriptions and owners being forced to find other, often more expensive, brands or options for commonly needed items. An increase in cost is also to be expected with the UK having to use a different authorisation company, separate to the EU.

Staff shortages are being faced by many businesses as freedom of movement and residency for EU citizens in the UK is increasingly revoked, and many are naturally discouraged by the visa application process and potential complications that can come with trying to settle in the post Brexit UK.

What will Rishi Sunak do to help the health sector?

With a new prime minister appointed, many are looking for guidance to solve the issues faced by the pharmaceutical and healthcare industries. And with a GP as a father and a pharmacist as a mother, it’s no wonder there are high hopes on Rishi Sunak to turn the industry around given his family background.

Rishi’s certainly made it clear in the past that the NHS and social care sector is of high value to him and has stated his vision to reform the NHS, reduce the backlog and create a more efficient service. However, it’s clear he is prioritising dealing with inflation and re-gaining international confidence both from a monetary and political sense after taking over from Liz Truss’ 45 days in 10 Downing Street. Given that he only has two years left before the next general election, we can only hope for the best in that short time. 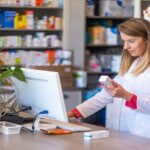