How going green can keep you out of the red

In today’s eco-conscious consumer market, becoming more environmentally friendly can be a bonus to businesses. Alison Brinkworth looks at how SMEs are using innovative ideas to meet the green agenda and boost their success and reputation.

The rise of the green agenda has shone a light on the impact that businesses, large and small, can have on the environment with pressure mounting to adapt operations and activities.

For some SMEs, this move has provided them with opportunities to develop new ideas, product lines and changes that prove good for business as well as the environment.

Gloucester-based LifeArt Coffins has used innovation to create a successful business that is making environmental in-roads in the UK’s death care industry.

From manufacture through to cremation, LifeArt’s coffins and caskets, made from fibreboard, produce up to 87% less greenhouse gas emissions than regular coffins made of chipboard or MDF. LifeArt Coffins also uses up to 80% fewer trees in its construction process.

Simon Rothwell, Chief Executive of LifeArt Coffins, said: “I never really thought much about coffins until I lost my dad. It wasn’t until the funeral that I realised the coffin was veneered chipboard and I knew burning chipboard wasn’t good for the environment.

“I started talking to funeral directors and became aware that most coffins were now made of veneered chipboard or MDF.  It turns out that these coffins began to replace solid wood in the 1970’s at a time when the environment wasn’t a mainstream public concern – now most coffins are made of this material.

“Cremation rates are currently at 77% and cremating these types of coffins are causing a lot of air pollution but the public don’t realise. In the UK alone, we are cremating over 17.5 million tonnes of chipboard or MDF coffins every year.”

Simon became aware of ground-breaking innovations in coffin making by Australian company LifeArt International, which was replicating the look of a veneered chipboard coffins. Setting up a joint venture in the UK called LifeArt Coffins Ltd, the company launched a factory in Gloucester in 2017.

Setting up with environmentally friendly aims from the start, the business also recycles its off-cuts and uses wood sourced from sustainable operations, meaning more trees are planted than harvested. The company also works with suppliers who all adhere to the same set of ecological values as it does.

In terms of how being green-friendly can help boost a business, Simon has clear advice for other companies: “There is a growing public expectation that businesses need to have a social purpose as well as a wealth creation one. As a business owner, you have to be aware of both ethical and financial considerations.

“Pressure is really growing on governments to act on the climate emergency and manufacturing firms that don’t develop low carbon products may well find themselves legislated out of business in the not-too-distant future.”

“Trade bodies ought to be sparking conversations about the environment too, to help sectors across the business community to decarbonise. There’s also an onus on the public to choose suppliers who are truly ethical and for all of us to call out those who engage in “greenwashing”, which is basically putting an “eco spin” on something that isn’t really delivering any benefit to the environment.”

That pressure on the Government has never been more apparent than during on-going protests by Extinction Rebellion, the activist group using civil disobedience to call for greater government action against the climate emergency.

Protestors want action that goes beyond what was published in the Government’s 25 Year Environment Plan published last year, which sets out goals for improving the environment within a generation, detailing how it will work with businesses and communities.

So far, the Government’s efforts to minimise waste and plastic pollution have seen the introduction of the world’s strongest microbeads ban along with plans to ban plastic straws, cotton buds and stirrers, extend the five pence plastic bag charge and introduce a tax on plastic packaging with less than 30% recycled content.

Emerging as part of this green agenda is Birmingham-based The Clean Kilo. The company opened in June last year and is the largest zero waste supermarket in the UK. In that time, it has already won the Best Grocer 2018 award from Slow Food UK, an organisation that strives for good, clean and fair food, and has been shortlisted for Best Retailer in the Independent Birmingham Awards.

It was the idea of partners Tom Pell and Jeanette Wong, who were annoyed with the frivolous use of plastic packaging at supermarkets and realised there was nowhere to go to buy products without unnecessary waste.

Setting up their own business based on a strong ethical mission, the pair funded the project through a successful Crowdfunding appeal that shot over their target, raising over £20,000. Now shoppers can buy groceries using their own containers and bags for everything from coffee beans to cleaning products and rice to fruit and veg; mainly sourced from small, local suppliers.

Jeanette Wong, Co-founder of The Clean Kilo, said “Consumers support and respect an environmental small business like ours as they know we have genuinely set up to help reduce plastic pollution, so they go out of their way to support us.

“We believe most consumers want to do what is morally and ethically right. With the growing coverage on the media regarding plastic packaging being sent abroad, damaging third world countries, or plastic escaping into the ocean, the consumer is now more than ever trying to do the right thing.”

The Clean Kilo has clearly found its niche and is the only zero waste shop in the country to offer plastic-free crisps, priding itself on saving over 123,632 pieces of plastic in the past year.

The business has also tapped into an emerging industry as there are now over 200 zero waste shops or stalls in the UK that are highlighted on the Zero Waste Near Me website, which informs consumers on local shops selling unpackaged food.

Alongside these new companies, there are more established businesses making small environmentally friendly changes that can appeal to their customer base.

Webbs, a family-run shopping and garden centre in Wychbold, Worcestershire, recently started using compostable wrapping instead of plastic on its members’ magazines and brochures. While farmer Charles Hudson diversified his business to grow a 14-acre field of delphiniums alongside arable farmland at Wyke Manor Estate in Pershore to turn the flowers into biodegradable petal confetti.

It has been over 20 years since Charles’s idea inspired the Real Flower Petal Confetti Company and led to the product being used at celebrity weddings. Prince Harry even threw the petal confetti over Prince Charles and his new wife Camilla at their Royal wedding.

The Carbon Trust, which provides specialist support to organisations worldwide to accelerate the move to a sustainable, low carbon economy, realised that many businesses can struggle with how to adapt. That’s why, this summer, the Trust launched a Climate Leadership Framework to help businesses.

Hugh Jones of The Carbon Trust said: “Policymakers globally are considering how and when their economies can transition to net zero emissions and there is a heightened public awareness of climate change issues.

“However, for the majority of businesses, understanding their climate change impacts and devising a strategic approach to becoming a net zero emissions organisation remains a significant challenge.”

Research by the Trust found that most businesses encountered barriers as they attempted to tackle issues like good quality reporting; gaining a full and detailed grasp of the risks and opportunities presented by climate change; identifying the innovation and influencing actions required to overcome the barriers to achieving longer-term reductions; and producing a comprehensive and costed implementation plan to support commitments.

Hugh added: “This is why we have developed the Climate Leadership Framework. It assesses a company’s current performance on climate change using a scorecard assessment before providing specific actions in a bespoke roadmap that is a powerful tool for engaging and influencing senior leaders within the organisation.

“The end result is a holistic overview of a company’s current position and the identification of the necessary steps to make progress and ultimately become a climate leader.” 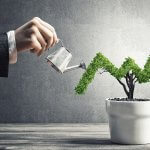