It is a fact that cryptocurrency is spreading across the world like wildfire. Despite this, many people still don’t know much about it. They might have heard about crypto in passing, but very few know what it’s actually about.

FTX purchased one of the Super Bowl ads spots in a bid to change that. In a statement, CEO Sam Bankman-Fried stated that the company aimed to reach 92 million people during the game and hoped to portray cryptocurrency in a positive light in order to get more people invested in it and his company itself.

Although the news took the world by storm, FTX had previously spent heavily on sports partnerships as part of its strategy to promote crypto and its company as an authority within the industry. Millions of people watch the Super Bowl every year, so there are few better platforms to use for promotions. And FTX is far from the only company to realize this.

Nowadays, more companies are invested in promoting cryptocurrency to the masses, pushing for it to become more mainstream to convert more users. Why? Because the more people adopt crypto as a standard, the more the industry flourishes.

How Can the Super Bowl Promote Crypto?

Cryptocurrency has become more mainstream recently and companies that provide related services are scrambling to promote it further and bring in more users to their platform or industry. Whether by coincidence or design, most are starting to recognize the NFL Championships as a great way to do that.

The Super Bowl is the top-rated TV program of the year in the United States and has beat the record for the highest-rated broadcast in U.S history many times. Millions of people tune in from across the nation to watch the NFL Championship, making it the perfect advertising platform. According to FTX’s CEO, this is precisely why he purchased an ad spot for the broadcast.

But how exactly can the Super Bowl promote crypto?

However, 30-second ad spots can go for millions of dollars simply to buy a space on the broadcast alone. A company can spend millions more on other facets of the advertisement campaign.

But it pays off due to the massive audience that will see the commercial.

Crypto’s Target Audience
The Super Bowl draws a diverse crowd, most of which will have little exposure to crypto. This plays to FTX’s benefit as it provides an opportunity to spread its message to a new audience and convert more customers. Another reason it works out so well is that 4 out of 10 Super Bowl viewers are reported to be between the ages of 18-59, which is the exact demographic that the crypto industry is targeting.

FTX’s CEO said he aimed to reach over 92 million people using the Super Bowl and promote cryptocurrency and his company as an authority. Considering that over 111 million Americans watched the game in 2011, his goal doesn’t seem so far-fetched.

The Crypto Super Bowl and What It Might Mean

FTX isn’t the first company to take advantage of the national interest that the NFL Championship brings. For years, advertisers have used the event to draw attention to their business and convert customers.

However, the company’s  purchase of Super Bowl ad time has prompted other crypto companies to do the same. Crypto.com is a case in point, but others like Bitbuy and Coinbase have quickly joined the ranks.

The massive barrage of crypto companies advertising during the Super Bowl this year has brought to mind the “Dot.com” Super Bowl in 2000, when over a dozen companies, such as Pets.com and E-Stamp.com, all bought airtime during the Championship. Since only about 4 of those companies are still operating, many wonder if this year’s Super Bowl will herald a similar fate.

Another possible problem with the Super Bowl is that most NFL fans may not know much about crypto. On the one hand, this provides an opportunity for crypto companies to reach new customers and convert them. On the other hand, because the ads will be aired during the Super Bowl, these companies will be competing against more established and well-known brands to get their message out.

There is a real risk that their ads might end up lost in the noise.

It’s almost a foregone conclusion among experts that, at some point, cryptocurrency will become a digital standard, achieving mass adoption across the world. Many industry insiders believe that practices such as copy trading will fuel this wider adoption across society. However, FTX’s CEO, who has already spent heavily on sports partnerships to promote his company and cryptocurrency in general, believes that sports are the fastest way to spread the word about cryptocurrency. And the Super Bowl, with its massive audience, is a key part of his strategy. 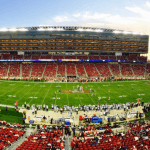