How Drones Are Being Used Commercially in Business

Though drones have become very popular toys for many adults and children alike there is so much more that drones are doing that is having a massive impact on many industries. In this article, we explore a few of the current commercial drone use cases.

For the emergency services and traffic police getting visibility over traffic issues provides very useful information with which they can make decisions. Typically, with traffic issues, the problem is only detected long after the event has taken place, and has then caused the traffic issue. As a result, there can be been many minutes, sometimes hours for the congestion and the impact of the congestion to be located, and a solution to then be implemented.

However, with the use of drones, decision-makers can keep a closer eye on traffic congestion and potential traffic issues and make important decisions a lot quicker to minimise the potential impact of a traffic accident.

Though helicopters can be used for a similar purpose in monitoring traffic flows and looking out for traffic accidents, it is very expensive to keep a helicopter in the air both from an equipment standpoint as well as a staffing standpoint. But drones remove both of those limitations. They are a lot cheaper to run than helicopters, and they do not require any staff to be in the drone per se, as they are controlled remotely.

This means that traffic consultants can monitor a broad area, for a much cheaper cost and take necessary actions to minimize and reduce congestion a lot sooner than they otherwise would be able to.

Specialist companies providing Drone Services are being called on for this service frequently.

In a similar way that drones can add value in traffic monitoring, they can also be of significant use in event security and even incident monitoring. If an incident breaks out at an event it can take quite some time for the relevant security guards to first be alerted that there is an incident and then to make their way to the scene before they can then assess the situation and call in for further assistance if required.

Depending on the nature of the event this can take quite some time as they may have to make their way through a significantly dense crowd of people.

However, when drones are utilised in this environment they can rapidly and effectively assess a situation and provide live video footage back to a command center they can then make informed decisions, in real time, based on objective live stream footage on their screens in front of them.

These drones could also record this footage if those recordings would be useful in legal proceedings at a later date.

In addition to security issues inside the event, drones can also be very effective for scanning the perimeter of an event to ensure nobody is trying to get unauthorised access.

Where you would usually need a security guard to be physically walking the perimeter of an event, a drone could do this a lot quicker and provide a lot more accurate information back to the event headquarters in the event of a breach.

Even the presence of a drone that is sporadically tracing the perimeter could be enough to deter many people who are considering trying to breach the event walls.

There are two main ways that drones are used in farming. Drones can act as another set of eyes for the farmer and can rapidly assess a large area of land whilst the farmer sits in front of a computer screen. The second way drones can add value in a farming situation is by performing certain functions on the land such as releasing poison and fertilizer in very targeted ways.

We are only at the beginning of seeing how drones are going to improve our ability to conduct many commercial operations more efficiently, and at a lower cost. In this article, we mentioned a few pertinent examples, but there is so much more drones can do and will do in the future. 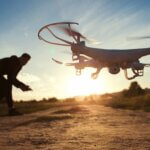