Here’s Why Bitcoin Will Never Move To Proof-of-Stake

Bitcoin has been around for over a decade now, and is by far and away the most important and high profile cryptocurrency on the block.

Underpinning the design of Bitcoin is the concept of proof-of-work (PoW), which is basically a mechanism that allows for transactions on the blockchain to be verified by having all users complete complex calculations.

The alternative to this approach is proof-of-stake (PoS), which aims to deliver similar levels of security without needing the same amount of processing power or energy to complete. Instead, users stake tokens to verify transactions, achieving consensus democratically.

Some altcoins have been made for PoS, while others like Ethereum are moving from PoW over to what is seen as a more efficient and eco-friendly alternative. So why does it seem like Bitcoin will forever be tethered to PoW?

The importance of security

The main benefit to Bitcoin steering clear of PoS is the added security which comes with the more energy-intensive angle on verifying transactions and confirming consensus across the network.

When you buy Bitcoin from an exchange like http://swyftx.com/au/buy/bitcoin/, or you transfer funds between wallets independently, this transaction is effectively overseen and validated by every other user on the chain.

The upshot of this is that not only do you get comprehensive security and transparency, but you also avoid scenarios of double-spending, which can come about where digital assets are involved.

The community of miners who have helped grow and perpetuate Bitcoin over the years is vast and ever-expanding. This is largely because mining in a PoW context is rewarded handsomely, so there are strong incentives to continue running such operations, and thus less of an inclination among the Bitcoin community to ditch this lucrative aspect of the ecosystem.

If the move to a PoS approach was made, miners would be the biggest losers. And since many mining pools are managed by influential individuals or organizations, the amount of opposition to abandoning PoW is always going to be immense.

The relevance of scale

There may be a growing number of PoS cryptocurrencies out there, but none have yet come close to matching the scope and scale of Bitcoin.

Being the biggest player, with the largest market cap and the most media attention focused on it, Bitcoin is simply an unknown quantity when it comes to rolling out a PoS migration. This level of uncertainty and risk is simply not tolerable in a project of this size, and so many are happy to continue swallowing the steep energy burden of PoW.

The element of control

The decentralized ethos of Bitcoin and the role of PoW go hand in hand, with the former being facilitated by the latter, allowing decisions to be made without the oversight of a central, governing body or any other individual or organization for that matter.

The fear is that migrating to PoS could dilute this control infrastructure, and even lead it to be manipulated and subverted to a greater degree.

The impact of value

Finally, Bitcoin is an asset with a value that can fluctuate like any other. But because it is entirely digital, it’s important to have a way of tying its worth to the world outside the mining rigs and wallets where it resides.

With proof-of-work, the value of Bitcoin is more easily measured, because there are of course costs involved in creating each new block and overseeing every transaction which takes place.

So in short, the obstacles standing between Bitcoin and a shift to proof-of-stake are so significant as to make this effectively impossible. 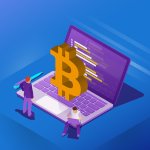