Gold Is the New Black

Gold Is the New Black

Peter Simpson, the brewer behind Guinness Golden Ale said: “My ambition was to create beautifully balanced ale from Guinness that would appeal to a broad range of people and introduce them to the exciting world of premium ale.

The release of a golden ale from Guinness is a bold new step and I’m really proud to have created a great new beer that is worthy of the Guinness name.” Head of Innovation for Guinness, Nick Curtis-Davis said: “There has never been a more exciting time for beer and at Guinness that inspires us. People are interested in beer again, and in trying new styles and varieties of beer. Guinness Golden Ale gives beer lovers the chance to try something new from a much loved brand, flavourful golden ale with all the character and quality that Guinness is famous for.”

About the brewers project:

The Brewers Project started last September and is a celebration of the vibrancy of the world of beer today and the heritage, quality and craft of brewing at St. James’s Gate in Dublin. It began with the reinterpretation of recipes from the 200 year old historic brewers’ diaries and the release of Guinness Dublin Porter and Guinness West Indies Porter last September and continues today with the release of Guinness Golden Ale. And this is just the beginning, Guinness is only 256 years into its 9,000 year brewery lease, there’s a lot more beer to make.

The Guinness Company was established in 1759, when Arthur Guinness signed a 9,000-year lease on St. James’s Gate Brewery in Dublin. Brewed using four natural ingredients, water, barley (malted & roasted), hops and yeast, Guinness is the world’s most popular stout. The iconic beer is brewed in 49 countries worldwide and sold in over 150 with 10 million glasses of Guinness enjoyed every day around the world. 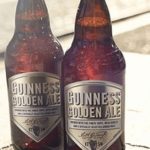