World Money Transfer Day is the brainchild of serial fintech entrepreneur Michael Kent and former British government minister Dame Tessa Jowell MP, who has been campaigning to cut the cost to Londoners of sending money abroad and launched a petition at www.stopthetransfertax.com.

Azimo enables users to send money online from across the UK and EU to over 190 countries and has pledged that it’ll reduce all fees to every country to £0 fees on World Money Transfer Day (15 March 2015), as well as 0 per cent commission on exchange rates.

85 per cent of people using money transfers would not be willing to pay more than £4 to send money abroad while they deemed to be a ‘fair’ fee to be around 2.4 per cent.

However, global corporations such as Western Union, MoneyGram and high street banks who dominate the industry, currently charge on average 8-10 per cent on money transfers and in some corridors over 20 per cent.

Almost one in ten 18 – 24 year olds (eight per cent) have sent money via a mobile phone or app, compared to less than one in a hundred over 55s.

Data from Azimo’s online service shows that the percentage of transactions sent from a mobile device more than doubled in the previous 12 months to January 2015.

Cash Pick Up rivals direct to bank amongst migrants

Migrant customers are increasingly looking for multiple options for collecting their money. Around 40 per cent would like to be able to pick-up cash; a similar number would like to send money to a bank account while only five per cent are interested in receiving money using a mobile wallet on a smartphone.

Money transfers continue to support the welfare of millions

According to The World Bank, money transfers support the welfare of an estimated 700 million people globally. Azimo data shows that family support remains the number one reason for customer sending money (over 70 per cent). Other notable reasons were Education, up from 3 per cent in January 2014 to 8 per cent in 2015 and Charitable Donations, which rose from 2 per cent to 5 per cent over the same period.

Michael Kent, CEO of Azimo, commented on the data: “It’s no surprise that the younger generation are using technology to send money overseas: online and mobile payments are only going to become more popular as people become more aware that they’re super easy, low cost, fast and secure. We want to help our customers of all ages become more savvy about how they send money abroad and prevent them from being ripped off by the traditional high-street players.”

Tessa Jowell has pledged her support to the campaign: “Millions of people in London and across the world send money overseas to people they love, but today too many are paying too much in exorbitant fees and charges to support their families.

“This Mother’s Day, participating money transfer companies will operate on a ‘No fee, No margin’ basis, and the countdown to World Money Transfer Day will see a range of events aimed at spreading a simple message – people don’t have to be ripped off.” 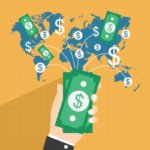