When the book The War for Talent was published in 2001, Apple had just released its first iPod, the world population stood at 6.2 billion people and the Dow Jones Industrial Average was below 10,000 points.

Today, more than 350 million iPods have been sold, global population figures are estimated at more than 7 billion and the Dow Jones recently hit a record high of 16,717. Yet despite these changes, a new survey from KPMG shows that businesses have barely moved when it comes to fighting the war for talent. “In 2001, the focus was on attracting and retaining ‘high potential’ and ‘high performing’ employees. It’s an approach that has become deeply engrained for many companies,” said Robert Bolton, co-leader of KPMG’s Global HR Centre of Excellence.

“In 2014, however, 66% of respondents are telling us it’s much more important for organisations to have a holistic approach to talent management that addresses the needs of all employees as well as those in critical roles; roles that are not defined by hierarchy but by position in the value chain.”

The survey results signify a dramatic shift in HR’s approach to business, brought about by four key factors. KPMG’s research identifies these as:

• a broad-based shortage of skilled workers

• the effects of increased globalisation

“These findings should serve as a wake-up call to HR managers who may still be clinging to outdated approaches to talent management,” said Bolton. “Addressing skill shortages throughout the entire organisation, and not just at the most senior levels, should be a top priority in 2014 and will become critical over the next two years.”

Bolton also found little evidence that the practices outlined in The War for Talent are actually contributing to improved business performance. “An analysis of the 106 original adopters of the ‘war for talent’ approach found that 13 years later, only 25% of those organizations can be categorised as market leaders,” said Bolton. “In addition, a third of those companies have ceased to exist altogether.”

According to Bolton, companies can change the status quo to give themselves an edge in the ongoing war for talent. “One thing many leading companies are doing is putting powerful new data analysis capabilities to work to help gauge their performance and fine-tune their people practices over time,” said Bolton. “There’s a real opportunity for companies to create a differentiated approach for the HR function, one that is a demonstrable driver for the business. Those companies that seize this opportunity stand to benefit, while those who take a narrow approach risk losing far more than simply the war for talent.”

KPMG International gathered input from 335 People & Change consultants from 47 countries as part of the survey, which took place between March and April 2014. 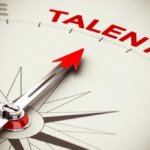