That is the message from the head of the African country’s central bank, with John Mangudya explaining:

Mr Mangudya went on to say that his government’s policy of handing economic control to black Zimbabweans had been a factor in the slump. He said the policy had been misunderstood by investors considering Zimbabwe.

The slump comes following Zimbabwe President Robert Mugagbe’s landslide victory in the country’s elections last year. However, it comes after the country had made some recovery from years of hyperinflation.

That was under a unity government however.

Mugagbe’s victory was largely campaigned on his indigenisation policy, which is the cause for the lack of investment according to Mr Mangudya.

He said it is imperative that the government more clearly outlines what the policy means. He said that investors should also be provided with clear guidelines about the policy.

The news of the downturn in Zimbabwean FDI came as the country signed a number of new deals in China. On a visit to the Asian country, with which Mugabe has previously enjoyed strong ties, nine investment deals were signed.

According to reports in the Zimbabwe Herald newspaper, the investments are across a number of sectors including, agriculture, energy, transport and telecommunications. Investment in the country’s tourism industry is also understood to be wrapped up in the deal, but no financial terms or details were provided. 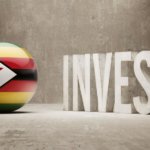