FDI, which excludes investment in financial sectors, totalled US$19.31bn cumulatively in January and February, the commerce ministry said in a statement.

Separately, Chinese overseas investment in the two months fell 37.2% year-on-year to US$11.54bn, the ministry said, with investment to Hong Kong and the European Union leading the decline.

By far the greatest proportion of investment in China comes from a group of 10 Asian countries and regions including Hong Kong, Taiwan, Japan, Thailand and Singapore.

“Investment from the 10 Asian countries and the US maintained relatively fast growth,” the ministry said in a statement.

Of China’s outbound investment, 65.4% of the total, or US$7.55bn, went to Hong Kong, the Association of Southeast Asian Nations (ASEAN), the EU, Australia, the US, Russia and Japan.

Investment in the US jumped 45.6%, while that to Australia gained 31%. Investment to Russia and Japan “at least doubled”, the ministry said, without providing amounts or specific percentage changes.

China’s total outstanding overseas investment as of the end of last month stood at US$537.2bn, the ministry said.

The figures come after foreign investment into China rebounded in 2013 to US$117.59bn as confidence in the country’s growth potential picked up.

It had declined the year before. Investment by China overseas also rose last year, hitting US$90.17bn, and officials said it could overtake the incoming total as early as this year. 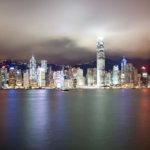