Embrace the Bull in the China Shop

The thrust of most negative reports centres around six key issues: that China has grown at an unprecedented rate; has a lot of debt; struggles with corruption; has unreliable statistics; is suffering a growth slowdown; and, because of its size, if it goes wrong could be a real problem for the global economy.

However, China is fully aware of its challenges, believes IW&I. The current slowdown is largely self-engineered by the new leadership, whose efforts to rein in lending and tackle corruption have imposed a significant austerity burden on growth – IW&I estimates over 3% of GDP. As China ‘cleans house’, bankruptcies and insolvencies will increasingly be part of the regular news-flow from China – but this is a sign that markets are being allowed to work, not a harbinger of imminent disaster.

John Haynes, Head of Research, Investec Wealth & Investment, said: “China has a lot of debt – the total burden of public and private sector debt has risen from around 150% of GDP to over 200% of GDP since 2008. But the country also has a lot of assets, even beyond the $3.8trn of foreign exchange reserves which amount to around one-third of GDP.

“Only a small fraction of investment over the past five years has been in ghost cities or corrupt projects; a good deal has been in productivity enhancing infrastructure, including housing and transportation. To the extent that it has been in ‘bad’ assets, these have largely been sponsored by regional/provincial governments whose credit will ultimately be supported by the remarkably solvent central government.”

Current concerns over the “shadow” banking system in China have a high profile because their products have been sold to consumers, but the sector is a small part of the overall debt burden, according to IW&I. The rise in China’s debt over the past five years has in fact predominantly come from the corporate sector – largely a function of loans to State Owned Industry. Once again, this is government debt by another name and the Chinese government is “good” for its debt, believes IW&I.

John Haynes continues: “For a crisis to develop either politics or the financial system must be unstable. Neither is the case in China. We know from our experience of the Eurozone crisis what to watch for – namely bankruptcies (or the possibility thereof) of key banks. This will not happen in China because the key institutions are state-owned and well funded: banks’ loan to deposit ratios are only around 70%, savings are all locally sourced, there is no risk of deposit flight and foreign funds in China are in illiquid investments.

“Many China watchers appear to be confusing the signals generated by a necessary tightening of control in the financial sector with an imminent crisis. We think this will prove to be overly pessimistic. We are not factoring-in a China ‘surge’ in our positive investment outlook for the year but simply a stabilisation. Since we think China is in control of its own destiny, to us this seems like a modest expectation.” 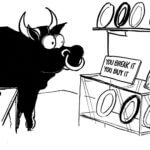