The loan, equivalent to US$ 1 million, will allow FMCC to expand its local currency lending, especially in rural areas where access to finance remains limited and local currency funding is constrained. Borrowing in local currency, rather than in dollars, will help small businesses and farmers who do not have income in hard currency avoid foreign exchange risk.

The EBRD three-year loan also comes at a time when medium-term local currency financing is very limited on the market.

FMCC is a well-established micro-finance institution with a strong presence in the Southern Osh and Naryn regions where a third of the total population of the country lives. The company is majority-owned by the Aga Khan Fund for Economic Development, an entity supporting projects and financing in several countries in Asia.

“We appreciate a long-standing partnership with the EBRD and its continuous support in providing us local currency funding, which is strongly needed in the current economic environment. We will be using the loan to fund our MSME clients, including those in primary agriculture, with the wider aim of supporting economic growth and poverty alleviation.”
To date, the EBRD has invested over €560 million in over 135 projects in the Kyrgyz Republic. Small business support is one of the Bank’s strategic priorities in the country. 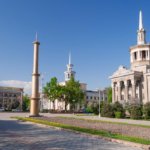