Opened in December 2002, Sketch was masterminded by French chef, Pierre Gagnaire, and restaurateur, Mourad Mazouz. The site consists of the Lecture Room & Library, the Parlour, the Glade, the East Bar, and the Gallery.

The Lecture Room & Library was awarded its first Michelin star in 2005, and was awarded a fifth Rosette in the AA Restaurant Guide 2009. In 2012, the restaurant won its second Michelin star, which it retains today.

The triple dream of launching a centre, a “lieu” or destination, for food, art and music has been realised by Mourad “Momo” Mazouz and his team of chefs and designers over two expansive floors of a converted 18th century building in Conduit Street, Mayfair, London.

Sketch is a complex and unique site that has attracted unprecedented media reaction for its myriad food, drink and entertainment styles since it opened in December 2002. Gagnaire’s culinary genius has inspired the menus throughout sketch and his eponymous Michelin three-starred Paris restaurant has a distinctive menu style, which Gagnaire has adapted for sketch.

The team at Sketch understand that the dining table is an auxiliary exhibition space, a platform for the presentation of new work.

The meal itself becomes a site-specific sculptural work that references Sketch’s location in the heart of London and invites diners to respond with their own thoughts and reactions.

In addition, fashion designer Richard Nicoll has been enlisted to create bespoke uniforms for the Gallery restaurant staff to wear. For the girls, the design is a play on Nicoll’s signature T-shirt dress silhouette; for the boys, a smart, grey boiler-suit.

“For the Sketch uniform project I liked the idea of creating elegant and utilitarian uniforms for the staff that reference a diner look but in a very modern and sophisticated way,” said Richard Nicoll. 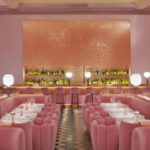