The announcement comes just days ahead of the vote for independence in Scotland – the campaign for which has seen the oilfields of the UK come under much scrutiny.

Conoco presently holds a 24% stake in the oilfield, with sources close to the firm advising that it has already hired banks to facilitate the sale. It is unclear as to how much the firm could get for its holding, but industry predictions suggest it could be as high as $3bn.

The Clair oilfield sits in the North Sea off the coast of Scotland, west of the Shetland islands.

It is also one of the most highly valued assets in the UK.

However, the exit by Conoco is indicative of the challenging environment the oil industry is facing. Despite having access to valuable sources of oil still, accessing it is complex and, with increasing regulation and attitudes, expensive to extract.

Despite being isolated in 1997, it was only nine years ago that the Clair oilfield started being exploited while work to develop a second site has just started. That is due to get up to production in three years, with many suggesting high revenues will be forthcoming.

However, holding 28.6% in the oilfield, biggest stakeholder BP is still undergoing an appraisal of the site.

The stance taken by BP highlights the biggest issue that Conoco has with its sale – the perceptions of potential buyers. There are worries over the UK oilfield’s ongoing production rates.

Selling its stake would allow Conoco to continue its strategy of exiting from a sweeping range of international holdings. The continuing strategy is to free up funding for investment in the US shale industry, which its most recent forecast suggesting that there were $2.6bn recoverable barrels in its Texas shale field of Eagle Ford.

In the past three years, Conoco has sold its stake in Lukoil and its 8.4% in the Kazakhstan Kashagan oilfield.

Details of the sale have not been disclosed at the time of writing.

The other shareholders on the Clair oilfield are Royal Dutch Shell and Chevron with a 28% and 19% holding respectively. 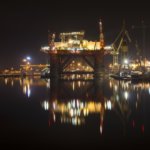