Two North West companies have been fined following the death of two workers at a Merseyside woodchip factory.

James Bibby, 25, and Thomas Elmer, 27, were both killed when carrying out maintenance work on a conveyor belt at the Sonae factory in Kirkby.

Liverpool Crown Court heard that on 7 December 2010 Mr Elmer, employed at the time by Metso Paper Ltd and Mr Bibby, a self-employed contractor for the same company, had been asked to replace part of conveyor belt at Sonae Industria (UK) Ltd’s Merseyside plant.

While carrying out the work the conveyor suddenly and unexpectedly started to operate, dragging both men into the machinery causing catastrophic fatal injuries.

An investigation by the Health and Safety Executive (HSE) found multiple failings by both companies to properly assess the risks associated with the work James and Thomas were carrying out.

Sonae Industria (UK) Ltd’s many failings included not properly assessing the risks associated with the work on the conveyor or sharing these with contractors, not having in place a proper process for managing contractors or a procedure for isolating dangerous machinery, and failing to train or check the competence of workers.

Valmet Ltd took over Metso Ltd in 2013 and was prosecuted for failing to ensure the site its workers were visiting had sufficient risk assessments and processes in place. It also failed to ensure its workers and contractors had adequate training for the tasks to be carried out or provided with the necessary information on the work they were being asked to perform.

Following the case, HSE’s Principal Inspector Mike Sebastian said: ‘James Bibby and Thomas Elmer should not have died. This is perhaps the most horrific case I have ever had to deal with and has had a devastating effect on both families.

‘Carrying out straightforward risk assessments is about protecting workers from serious harm, suffering life-changing injuries or, in this tragic case, death.

‘If both companies had put in place the simple steps to protect their workers’ safety these two young men would still be with us today.’

‘Thomas was the best big brother, he was the perfect mix of kind, loving, funny, with a little mischief, he would do anything for me. He protected me all my life, just knowing he was there made me feel safe. He was my confidante as well as my partner in crime and when he was killed, part of my heart died with him.

‘The complete disregard for any health and safety protocol that Sonae and Metso should have followed has not only robbed me of my brother, my parents of their son but my children of their only maternal uncle.’

‘The day James died it felt like someone had ripped inside my body and taken half my heart away. My younger son works in the same industry and faces everyday doing the same job, knowing his brother died because of someone else’s negligence. I worry every day history will repeat itself. 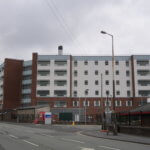