City of Bellevue, Nebraska – Opportunities for all

Bellevue, Nebraska is also home to Offutt Air Force Base, Strategic Command (STRATCOM) and the 55th Wing (55 WG), the largest wing of the United States Air Force’s Air Combat Command. As such, the base is a major economic hub for the area, and because of Offutt AFB, many defense contractors are drawn to the Bellevue area, including firms specializing in cybersecurity, programming, process design etc. Burks was hired in 2012 as Bellevue’s first Assistant City Administrator to support the City Administrator in the operation and management of the City. The Assistant City Administrator’s primary duties include economic development, organizational and community development, in addition to strategic planning, succession planning and providing administrative support. Burks states, “Our community currently has a number of exciting opportunities and I am proud to be supporting the people of Bellevue as we go through this exciting time.”

In April of 2015 Sarpy County’s unemployment rate was 2.4%, which is among the lowest across all of the American states. Additionally, the city is currently experiencing a wave of exciting new developments set to improve the City’s economic development and quality of life potential. One such development is a commercial retail expansion named Twin Creek Village, a modern commercial-retail development that will soon showcase the Bellevue Event Center.

Scheduled to be completed late summer of 2016, the Bellevue Event Center will be a state of the art conference and event center capable of hosting events as large as 800 people. The Twin Creek Development area will also be home to new restaurants, a larger theatre and other entertainment options, as well as a Courtyard by Marriott hotel connected to the Bellevue Event Center. Burks anticipates the Bellevue Event Center and Courtyard by Marriott Hotel will help to attract other businesses to the Twin Creek area. The catalyst intended to help support the City’s economy and establish a new destination place for entertainment and tourism.

Another key development supporting the city’s growth is the redevelopment of the Fort Crook Road Corridor, formerly the main thoroughfare between Offutt AFB and Omaha. In the 1990s, the construction of  the new Highway 75 led to traffic on Fort Crook Road diminishing. Therefore new uses were created to ensure the area’s full potential was reached.

The Fort Crook Road Corridor is now becoming an opportunity for mixed use developments, including successful data storage businesses in the Southroads Technology Park, formerly the home of PayPal and TD Ameritrade. These technological successes highlight the potential for significant investment along the Fort Crook Road Corridor, which could bring about a significant return on investment for those savvy enough to invest in the area.

There are also a number of automobile dealers expanding on Fort Crook Road supporting the local economy by bringing a lot of traffic into Bellevue and helping to support other area businesses. Bellevue is arguably the premier destination for buying a vehicle in Nebraska. Perhaps the most exciting aspect of Fort Crook Road’s redevelopment is Cornhusker Pointe. A former concrete plant is now being developed into a mixed use, residential and commercial-retail site. The City facilitated the environmental cleanup and marketed the redevelopment of the site in order to draw investment and raise social standards and property values in the area. Cornhusker Pointe is clearly one of the Omaha metropolitan area’s best success stories entering its final chapters.

Perhaps the most exciting aspect of the City’s redevelopment planning efforts is the work and growth potential from developing the Highway 34 corridor. This 4-lane road and new bridge over the Missouri River opened October of 2014. Highway 34 has created a connection between two major North – South routes, Interstate 29 and Highway 75. Improving the transportation connection to Interstate 80, one of the nation’s busiest East – West routes. Ultimately this development has expanded the City’s southern connections and provided greater links between southern Sarpy County and the City of Bellevue.

In order to take full advantage of these improved transportation links, the Bellevue citizens voted and approved local development incentive legislation, known as LB840, which provides the City with the opportunity to attract new projects through local incentives. The new Highway 34 Corridor is adjacent to a number of Greenfield and Brownfield sites, providing exellent new development opportunities for investors inside and outside of the United States to take advantage of.

Ultimately all of these new and innovative developments and redevelopments have an attractive, cost effective appeal to new developers, business owners and investors. Bellevue’s cost of living and quality of life are hard to match. New development will also help increase the area’s workforce expansion. By bringing new industries and businesses into the Bellevue area, an increase will be seen in the talent pool. There are a broad range of state and local incentives including, job training programs and tax incentives, which collectively offer those businesses and industries looking to move into Bellevue, Nebraska an attractive financial package called the Nebraska Advantage.

Bellevue, Nebraska prides itself on its patriotism, quality of life and strong work ethic, and has a lot to offer potential investors and businesses looking to move into the area. Burks wants potential developers and investors to know, “We believe that it is an exciting time in Bellevue and that the City is ready for and looks forward to the new opportunities and new relationships the future brings.”

To learn more about the opportunities in Bellevue, Nebraska, go to: Bellevue.net 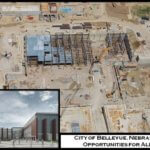