Undermining the economic growth in the country, the August figures come as the country suffers from slowing output growth and falling levels of imports.

The Commerce Ministry figures show that in August, China saw $7.2 billion (4.45 billion pounds) in FDI heading its way. That is a drop of 14% from August 2013 and the lowest total value since February 2012.

“It reflects the downward pressure on the manufacturing sector,

“The sector has not been doing well so it’s logical that companies are reducing their investment.”

Though FDI in China is an important indicator as to the health on a global level, the contribution it makes to the overall flow of working capital is fractional compared to other factors. The export level is more important for example, achieving a level of around $2 trillion last year.

The growth of output falling back to its slowest rate in six years is more of a worry for investors in China with fears rising of an impending downturn. The news has also seen a number of economists downwardly adjust their Chinese forecasts for the year.

Another concern is the drop in domestic demand which, together with a slowdown in the housing market, is dragging the economy away from a higher rate of growth.

The news that FDI has fallen in China is still a concern though.

This is largely because it has maintained a steady rate of year on year growth since joining the World Trade Organization in 2001 reaching a record high last year of $118 billion.

Despite the fall in August many are still predicting another record year in 2014. Excepting a disruption to global capital flow, it China’s FDI this year could attain $120 billion.

Levels of FDI into China are also up from some countries, with investment from South Korea increasing by over 31% annually. Investment from Britain too has leapt up by nearly 19%.

Conversely, Japanese investment has plunged by over 43% with US and European investment falling by around 17% to 18%. 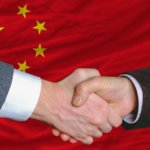